I got to visit Counties Kildare and Carlow last week to walk a new section of a trail that has enchanted me for some time.

The Barrow Way follows Ireland’s second longest river and various side canals for a total distance of 120km. It runs southwards from the Grand Canal to the point where the river becomes tidal, at St. Mullin’s.

My first experience of the Barrow Way was back in 2015 when I walked the 18km section from Carlow Town to Bagenalstown (or Muine Bheag). I loved the easy walking, ever changing sights and being able to stop off and enjoy the sunshine in a beer garden in the pretty village of Leighlinbridge. An added bonus was being able to travel by train back to my start point.

This time I chose the section immediately to the north, from Athy in County Kildare to Carlow Town. This section is a similar distance and once again has the the benefit of train stations at each end. 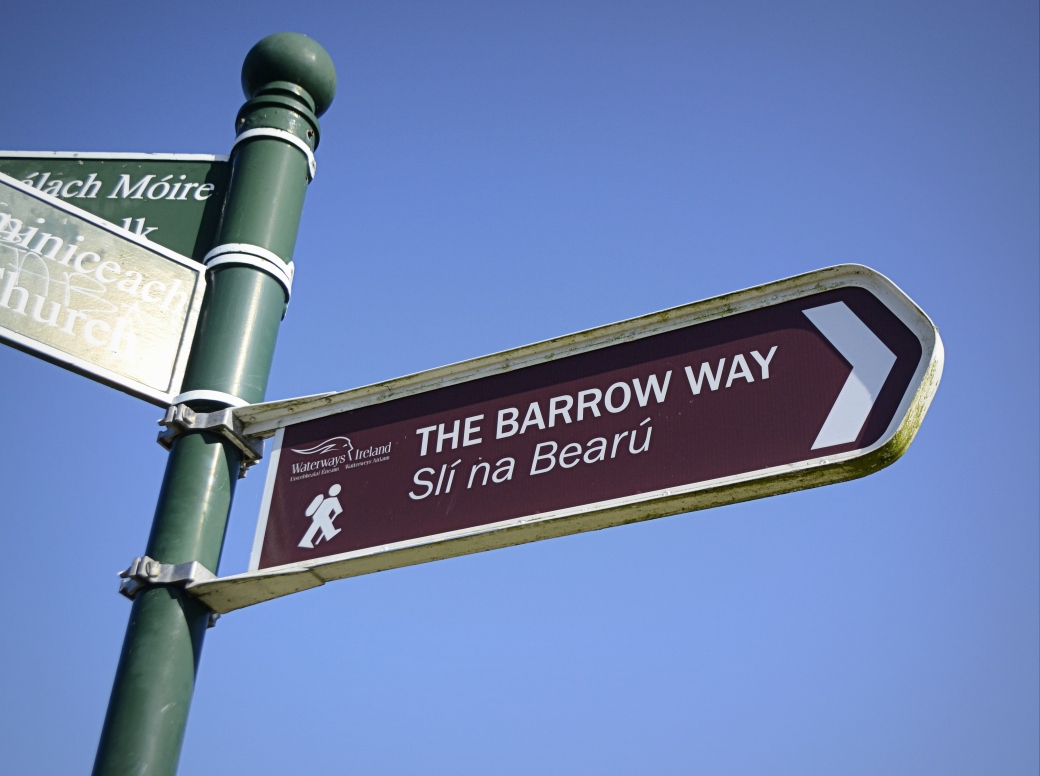 It was a glorious Spring day, the best weather I’d experienced so far this year. In fact, for much of the walk I felt the need to put the hood up on my (light) raincoat to help protect my pasty-skinned face from sunburn.

Some of my hiking companions might find a walk like this a bit dull but for me the appeal is that  you can keep walking and get lost in your thoughts without exerting too much energy or having to worry about navigating. And while the scenery isn’t strictly stunning, it’s very pleasant countryside that probably not a lot of people get to see (certainly away from the main towns/access points). There’s also enough in the way of stone bridges, locks, weirs and assorted historic architecture to keep your interest. Occasional glimpses of distant mountains and a passing train helped too.

I did find that I preferred the more winding sections to the long, straight parts where you seemed to be walking for ages to reach a far off point. One thing I appreciated this time was the decent number of benches to take a rest – which I did each time I came across one.

Here are some of the sights from my route.

Leaving Athy, with Whites Castle (1417) overlooking the current, Crom-a-Boo Bridge (1796). The town once stood at the edge of the Pale. I realised later that the path here isn’t actually part of the Barrow Way, which follows the Barrow Line of the Grand Canal until meeting the river just south of Athy.

The Horse Bridge, where the River Barrow meets the Barrow Line

Two friendly Collies from a riverside house who followed me for a while urging me to throw a stick for them. This shot gives a feel for the conditions underfoot for much of the route. 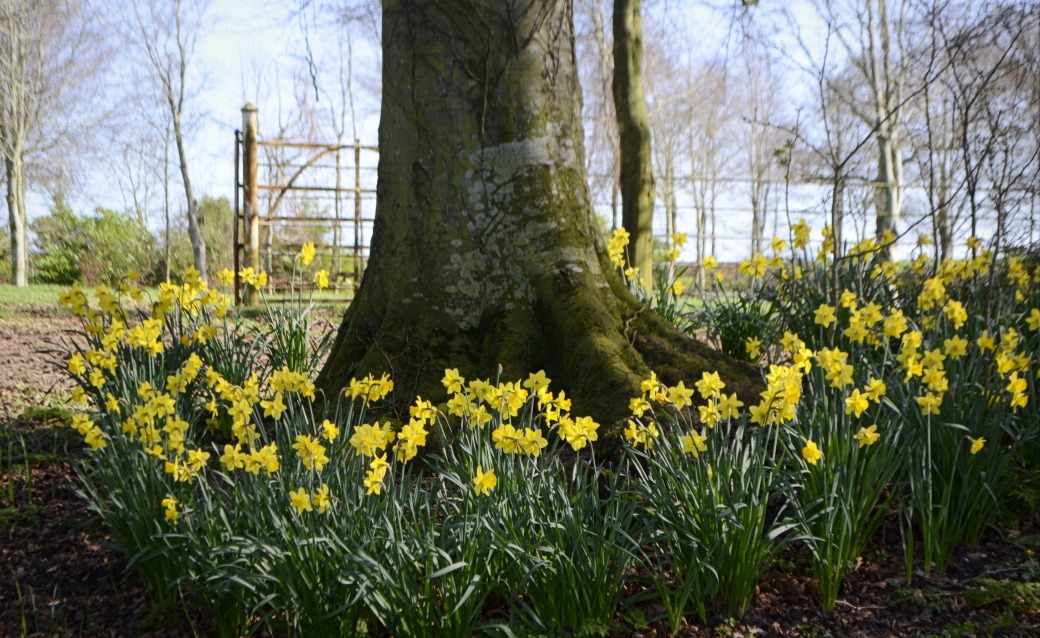 A striking Spring sight just off the path

A typical scene along the river, with an angler I passed on the right 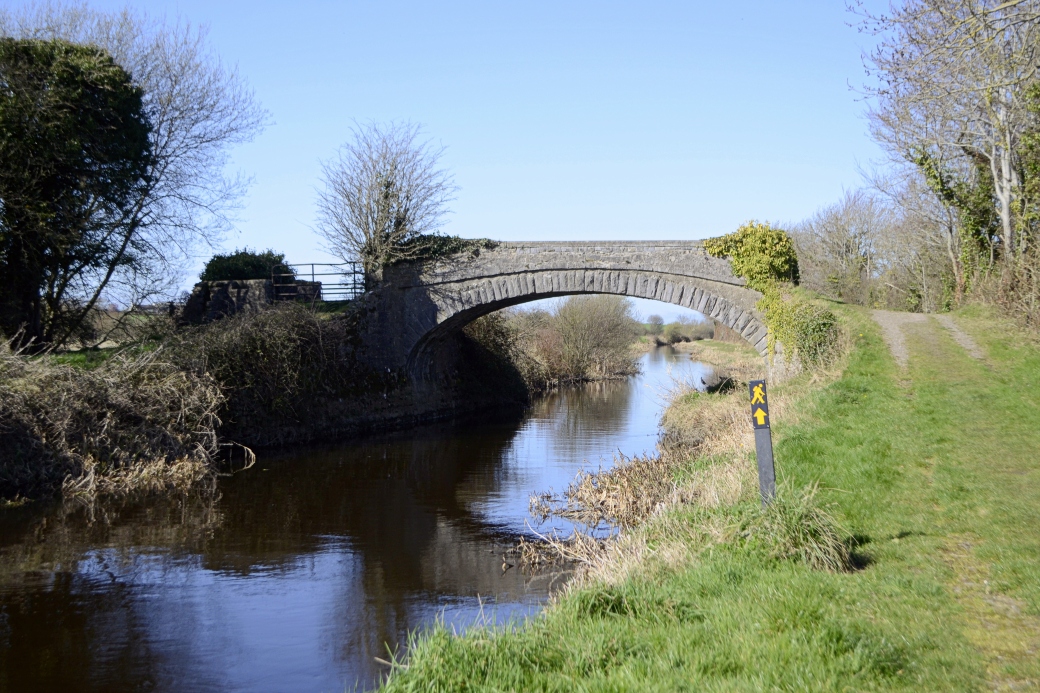 Stone bridge over a section of side canal; I always preferred following the river itself

The towering Levitstown Mill, which was ruined by a fire in 1942. Malt was once prepared here and transported by barge to the Guinness Brewery in Dublin.

I did a double take at this bench (but still sat on it): it’s built into a tree trunk. 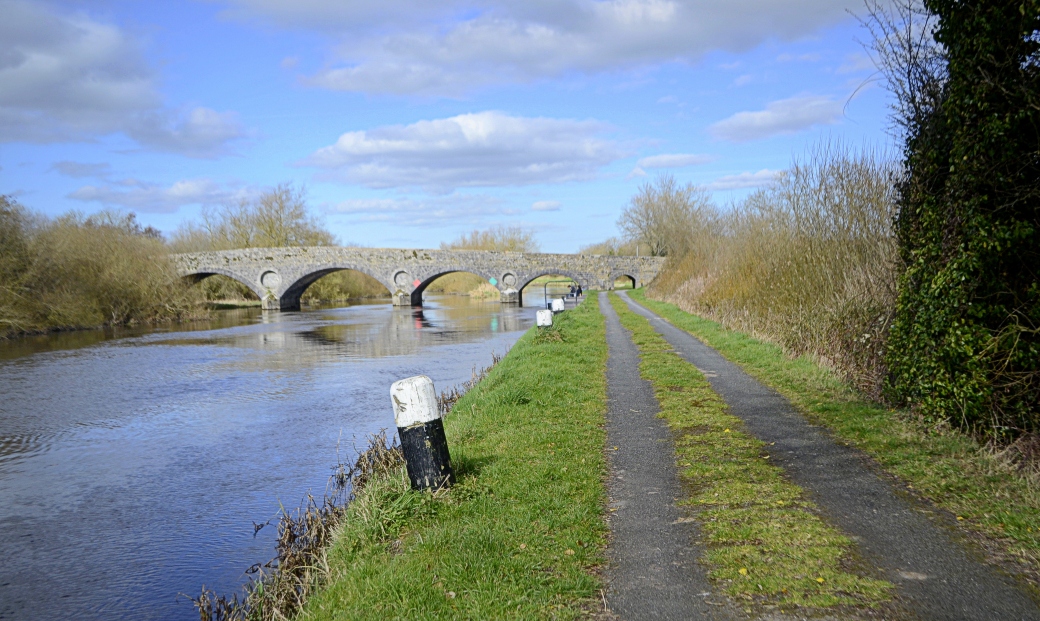 Looking back on Maganey Bridge, which dates to about 1800. It was a relief to reach Maganey as it’s just over the halfway point. There’s good access to the route here, just off the busy main road, and people were enjoying the sunshine.

A zoomed in shot taken on the approach to Maganey Lock. The two-bedroom lock house was recently on sale for €70,000. A plaque on the wall records that the writer Eugene Watters (Eoghan ó Tuairisc) lived there from 1968 – 1981 and ‘He was happy here’. 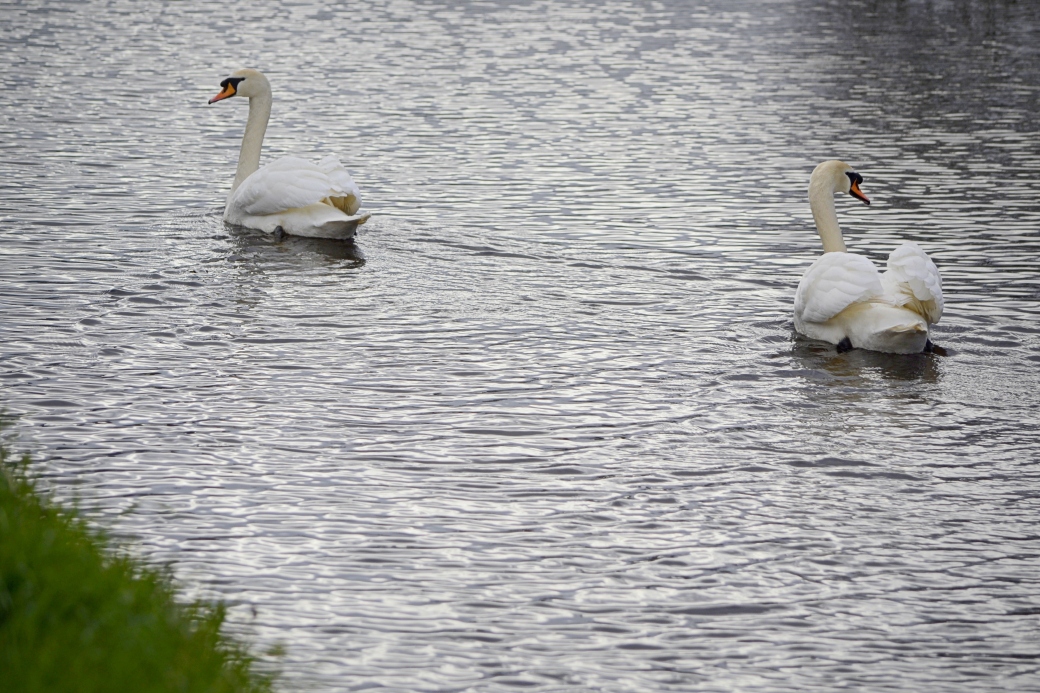 A pair of swans just to the south of Maganey Lock 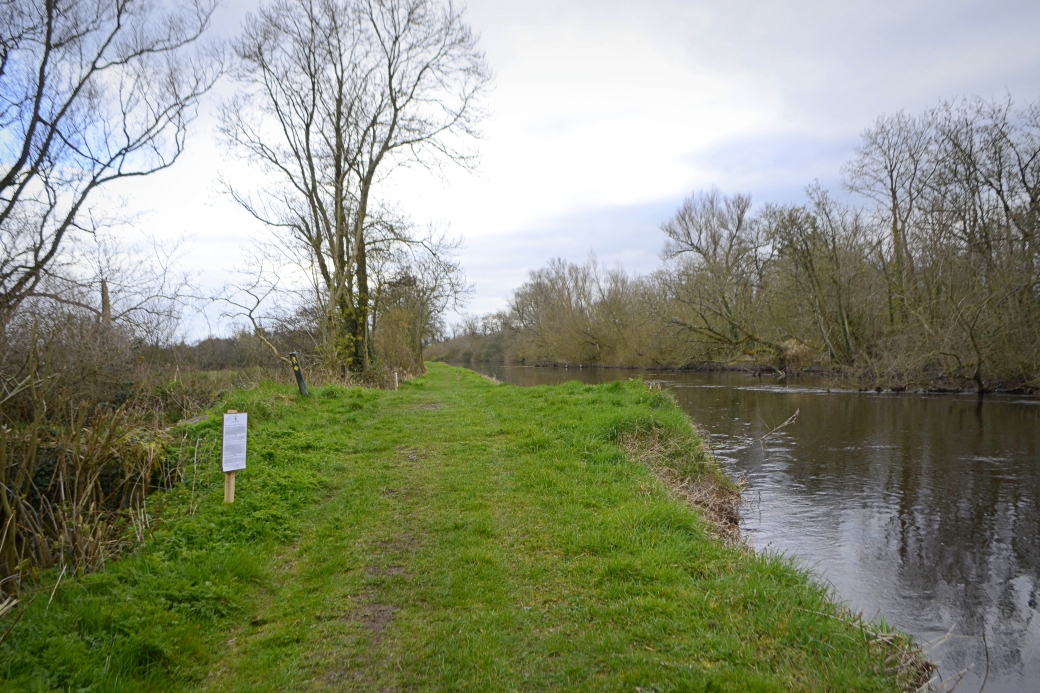 This unassuming spot marks another milestone on the route: three Irish counties meet here. I’m standing in Kildare, just before a bridge over the River Lerr as it joins the Barrow. Beyond is Carlow, and council site notices posted at each side relate to proposed development of the path. The far (western) bank is County Laois. 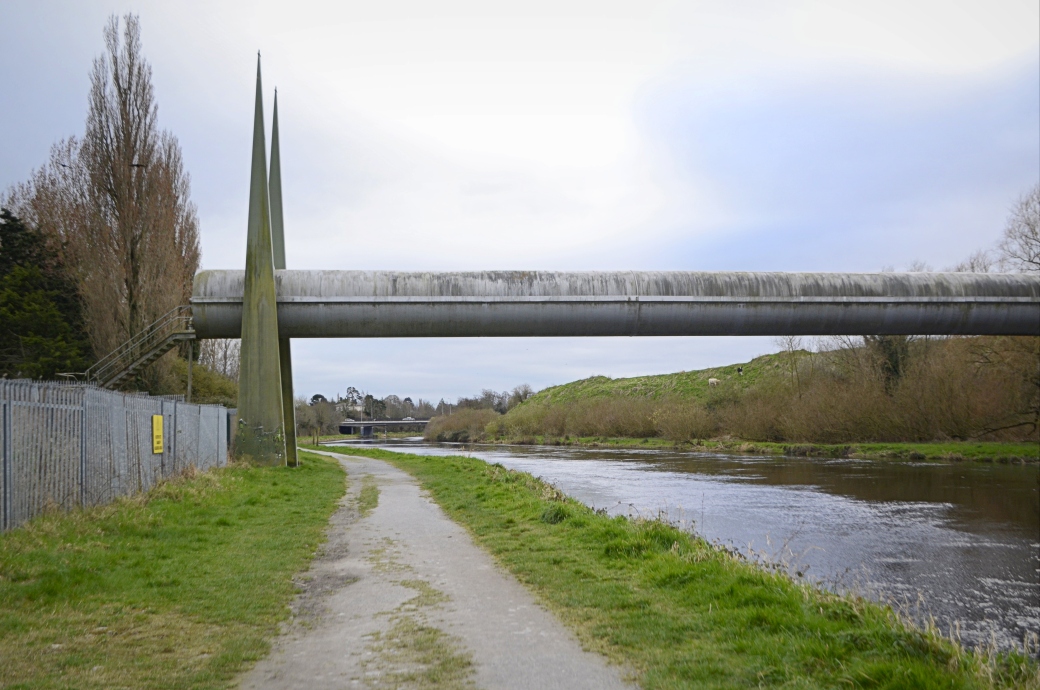 Geting more industrial and overcast on the approach to Carlow Town, while cows graze on the opposite banks. This was the site of an old sugar factory.

The Old Graves cemetery overlooking the river; it was cleaned up and rededicated in recent years after being neglected for decades.

The beautiful 46m tall spire of Carlow’s Cathedral of the Assumption (1833) dominates the town and was a welcome sight when I first spotted it from a few miles away. 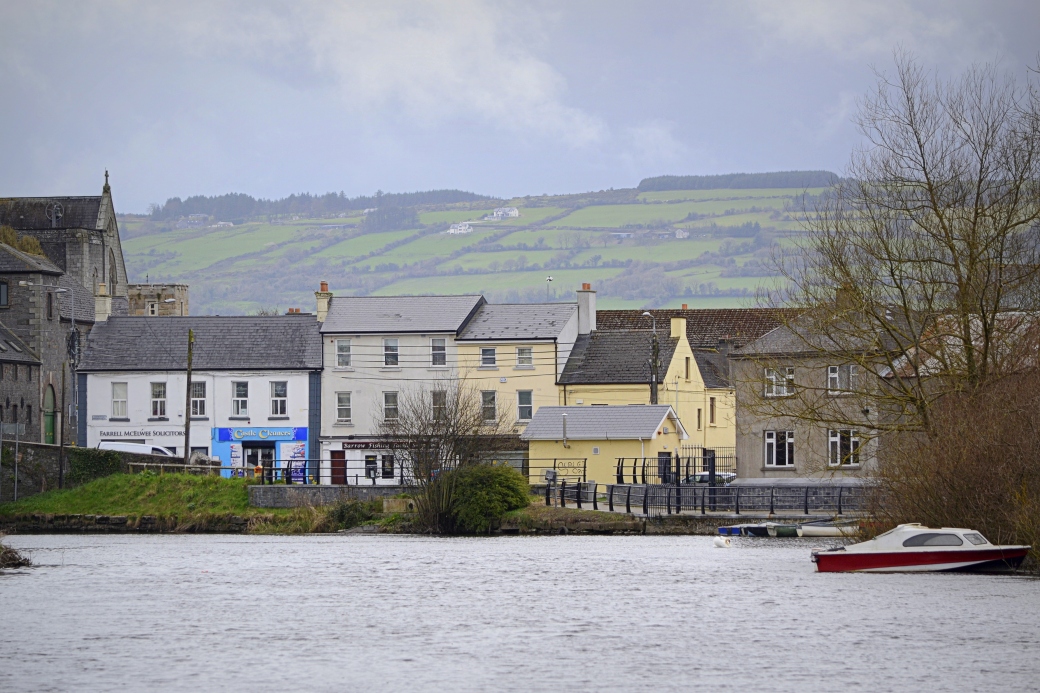 In Carlow Town and looking across the Barrow to Graiguecullen, which historically was in County Laois. The high ridge beyond is part of the Castlecomer Plateau, which was a notable feature for much of my walk.

A very enjoyable day’s walking overall, helped by the sunny weather. I already want to return to walk the later stages of the Barrow Way, which apparently have increasingly dramatic scenery. I’ve already been to the end point, the small village and former monastic site of St. Mullin’s, which is well worth visiting in its own right.

Sadly the route is currently mired in controversy with Waterways Ireland planning to ‘upgrade’ the path surface to make it suitable for cycling throughout. I have mixed feelings but ultimately think it should be left as it is. For one thing, the grassy surface is a joy to walk on, especially for longer days out like mine. And while I’m a cyclist myself, it’s great to have a long distance walking path where you’re not constantly wary of cyclists coming up behind you. I’ll keep an eye on developments; there’s a protest website and petition here.

17 thoughts on “The Barrow Way: Athy to Carlow”