During my recent visit to Edinburgh, we took a day trip to a town that had long intrigued me: Berwick-upon-Tweed, just across the border in the English county of Northumberland.

I’ve always been fascinated by borders and Berwick is the ultimate frontier town, famously changing hands between England and Scotland numerous times up until 1482 when the matter was finally settled.

Top image: Looking back on the town from a sundial built into Berwick (or the Old) Bridge 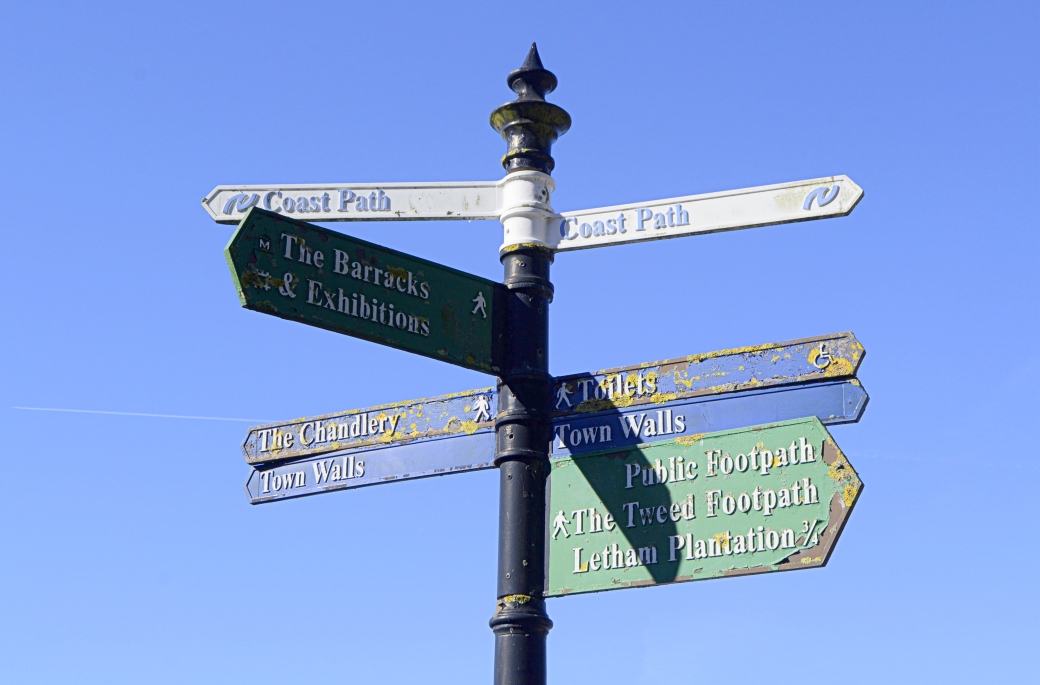 What’s more, when researching things to do in Berwick, I learned of the 28-mile Berwickshire Coastal Path which runs northwards from the town to the village of Cockburnspath (the latter I was familiar with as it’s also the terminus for the much longer Southern Upland Way, which begins in Portpatrick on Scotland’s opposite coast, where I visited in 2015). Rucksack Rose’s recent coincidental blog post on the trail, with its promise of undulating hills and dramatic cliff-top views, gave further inspiration. We resolved to walk the first part, from Berwick to the border and back.

Here are some sights and impressions from the day, from the coastal path as well as walking around the town before and after. 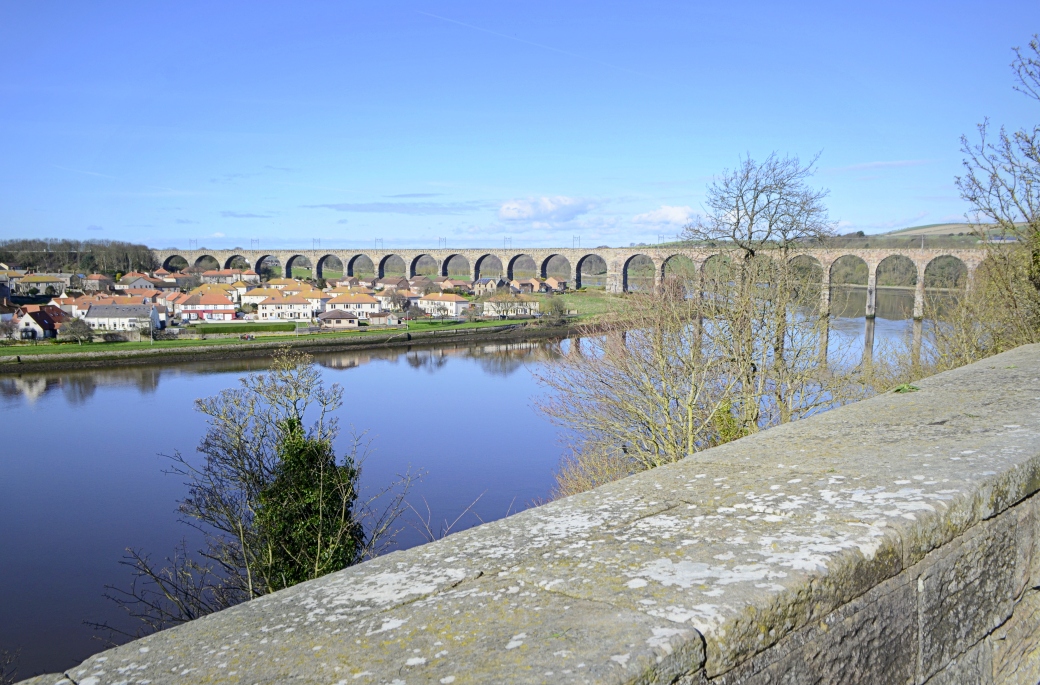 One thing that immediately struck me in Berwick was how wide the River Tweed is here; you could easily imagine it forming part of a physical and cultural boundary between peoples. 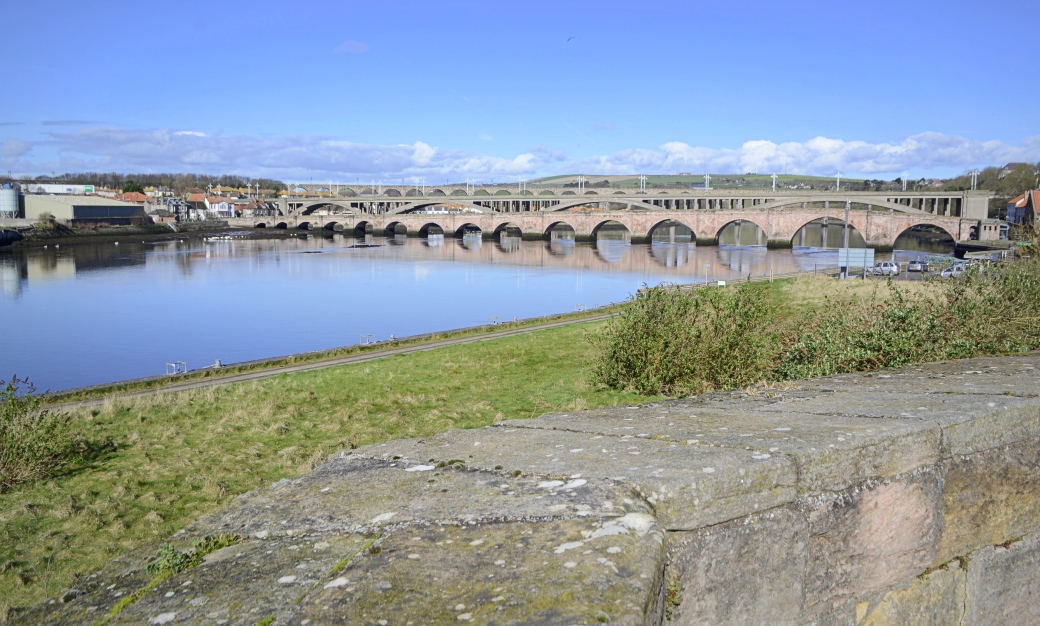 Three bridges seen from the town walls: closest is Berwick or the Old Bridge (early 17th century), then the Royal Tweed Bridge (1920s) and the railway bridge (mid 19th century) beyond 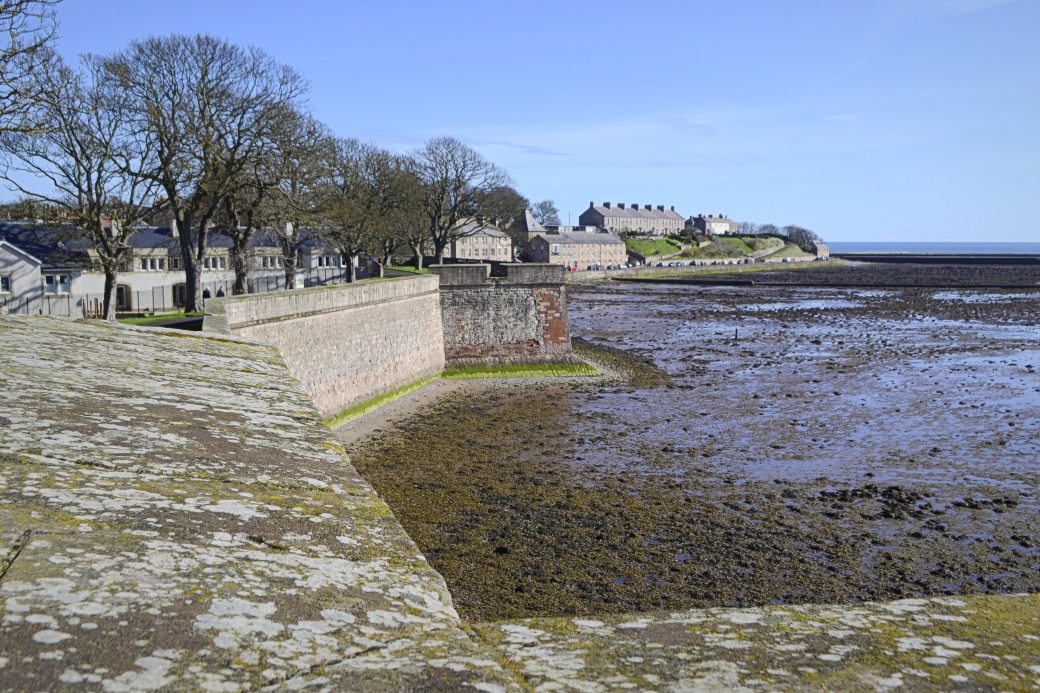 A view of the walls themselves, backing onto the Tweed Estuary. Construction started in 1558 and they were reputedly the most expensive project undertaken during the reign of Elizabeth I.

The walls, a mile-and-a-quarter in length, are a pleasure to walk around and I couldn’t help being reminded of the Walls of Derry, closer to home and dating to early the following century.

The town’s pier and lighthouse, the latter built in 1826 and England’s most northerly 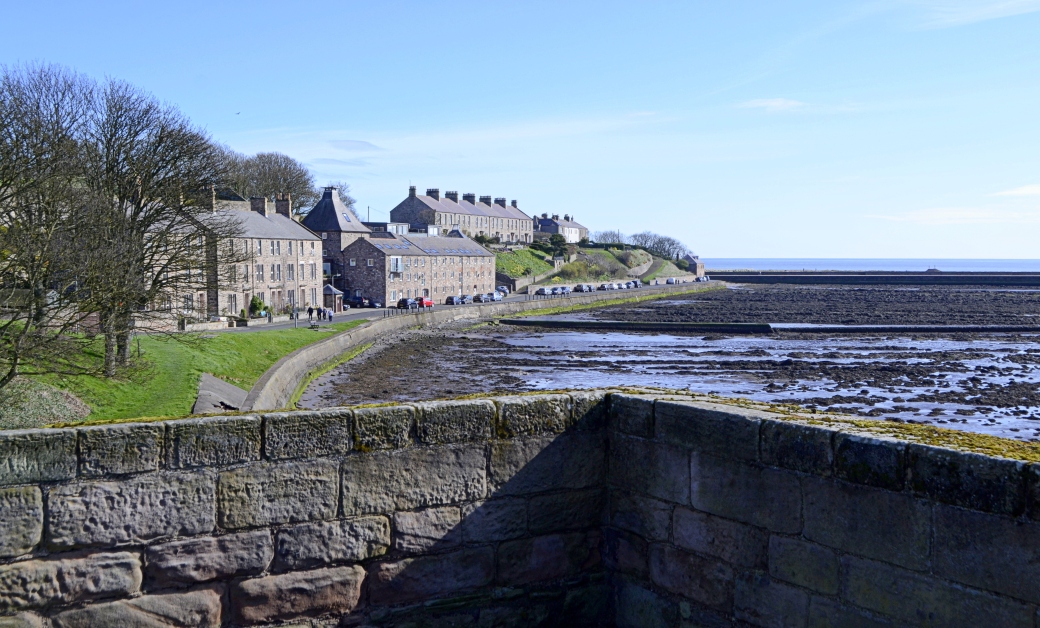 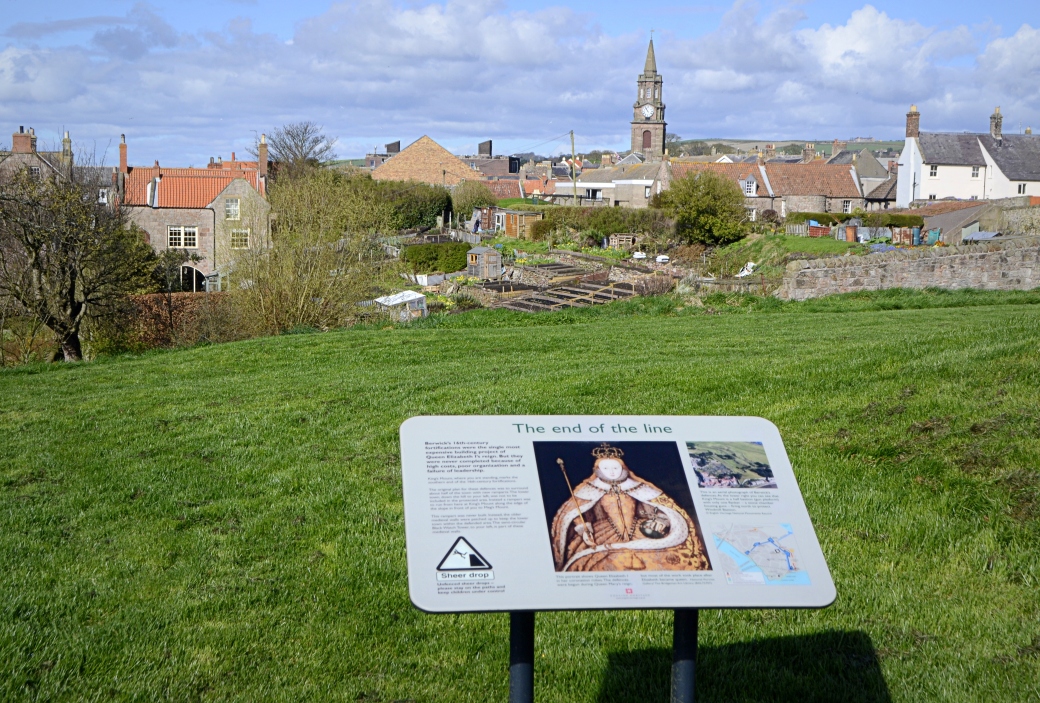 Looking back on the town, dominated by the 1750s Town Hall (or Guildhall) 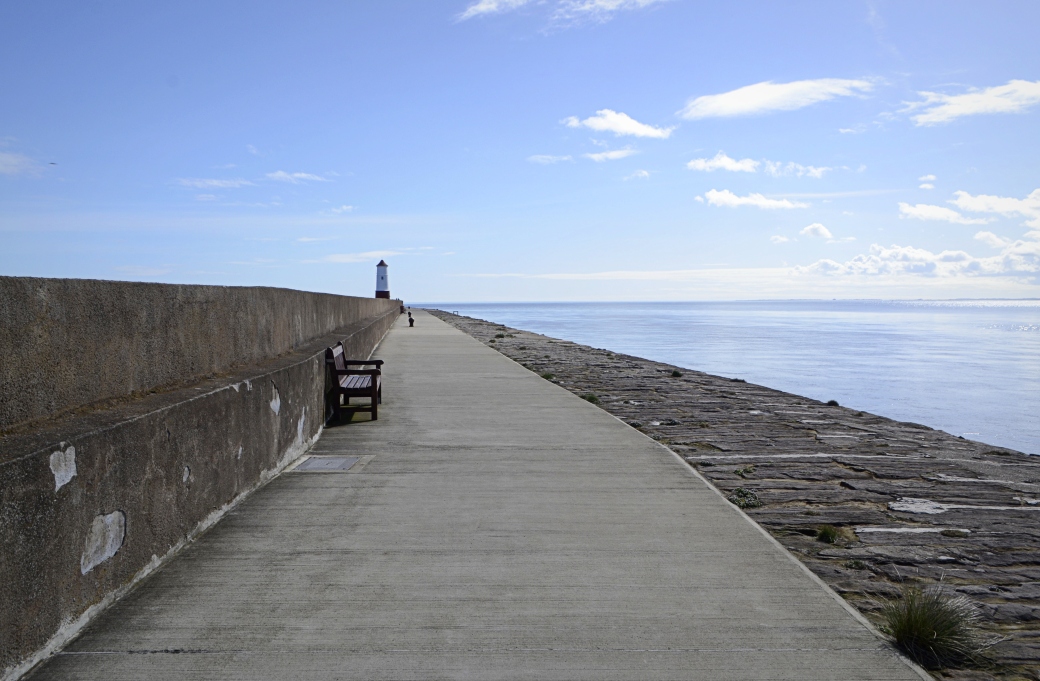 Walking along the pier to the lighthouse 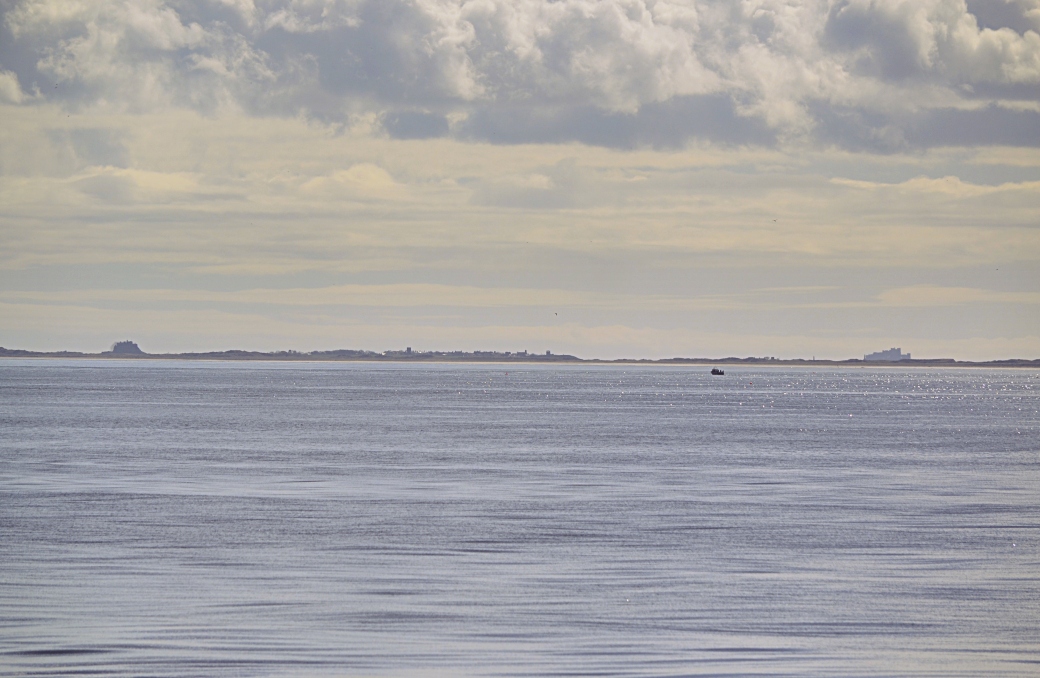 Looking south down the Northumberland coast from the lighthouse; the obvious landmarks are Lindisfarne Castle (Holy Island) on the left and Bamburgh Castle on the right

View from the pier across to Tweedmouth: I loved the clouds and their reflections in the water. You can just make out a man walking his dog on the island of sand in the centre (they made it back ok).

After visiting the lighthouse, we set off on the coastal path. At times there was an obvious, grassy track hugging the heights above the sea while other times it was less distinct even if it was still clear where you had to go. Our section close to Berwick passed through two golf courses and two caravan parks. 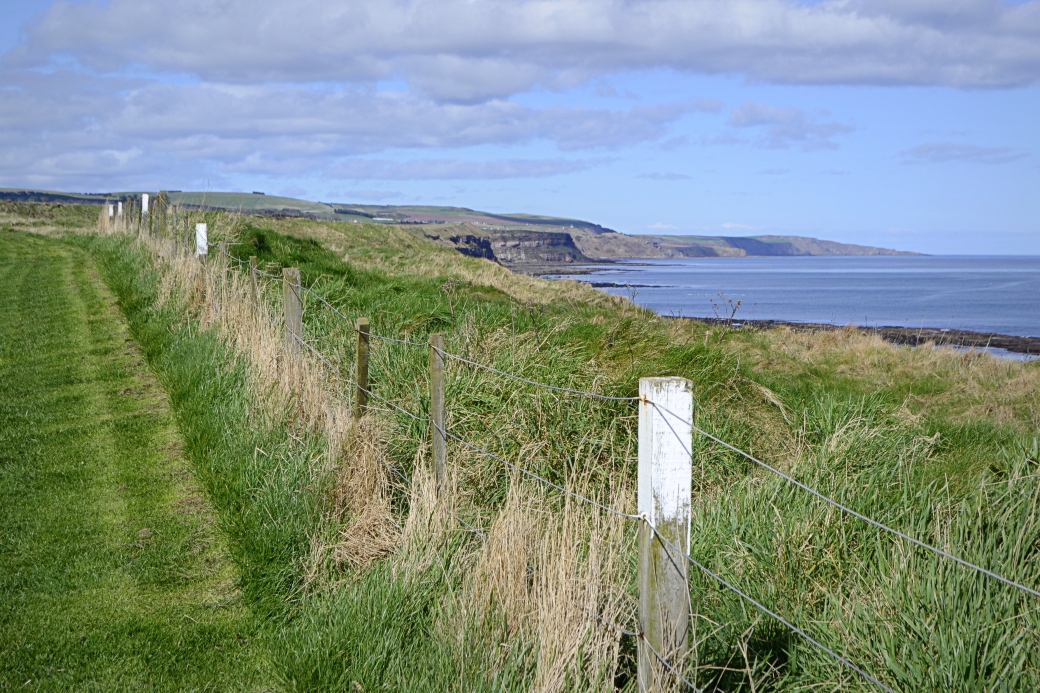 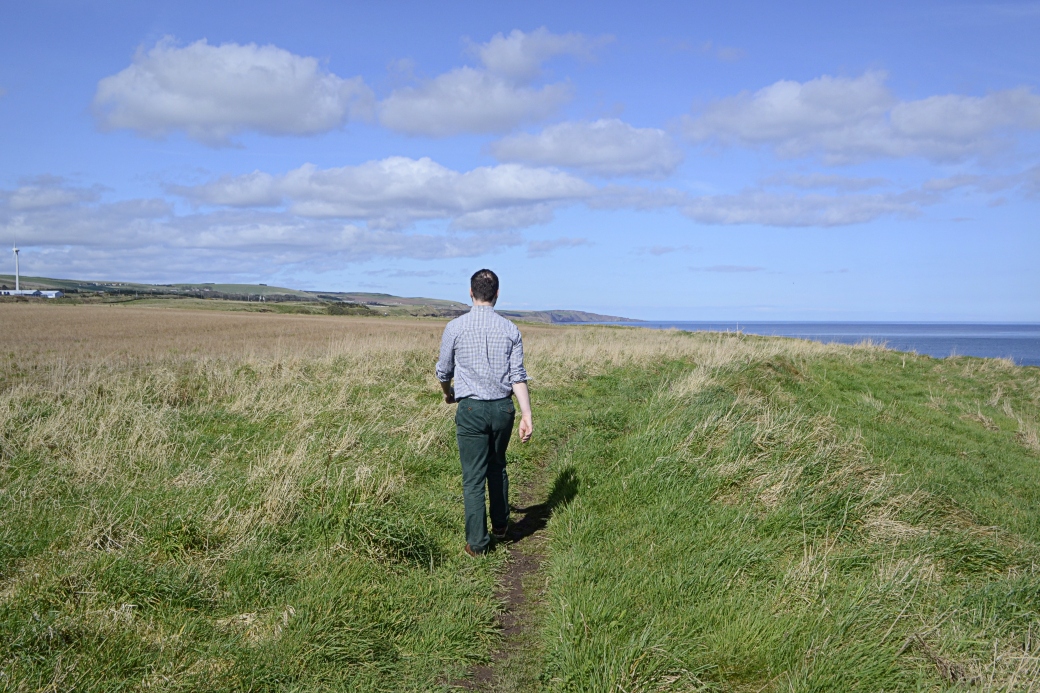 James following the path: for the most part, it was fine to walk it in trainers. The ground could be quite uneven though and I was actually glad to reach a tarmac road through a caravan park later on. 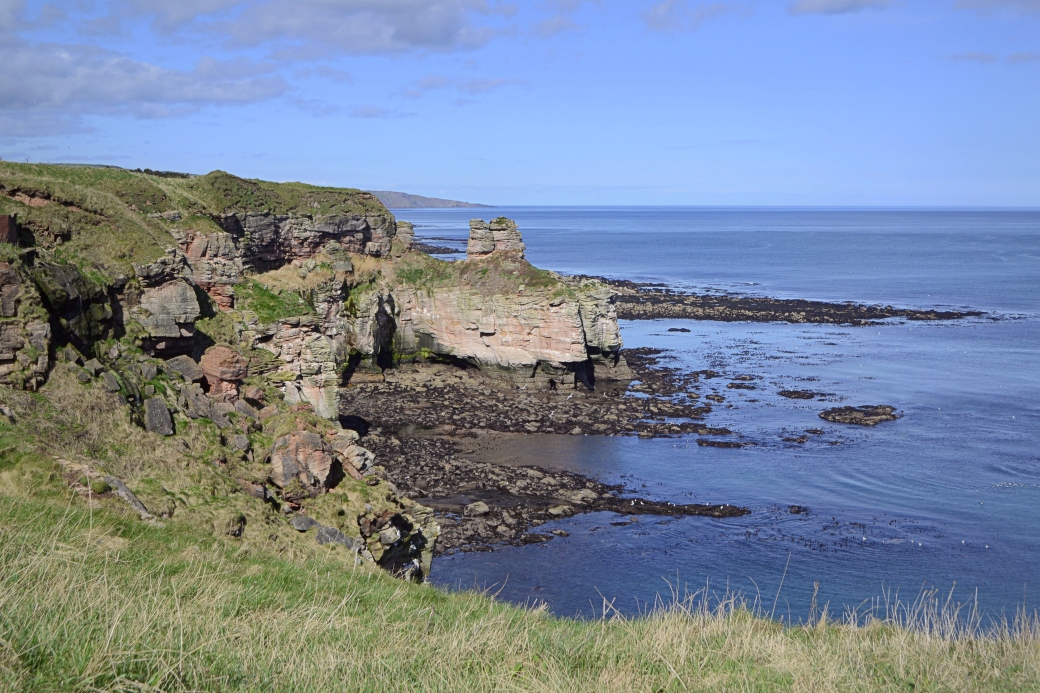 Some of the unusual rock formations (and caves) along the route 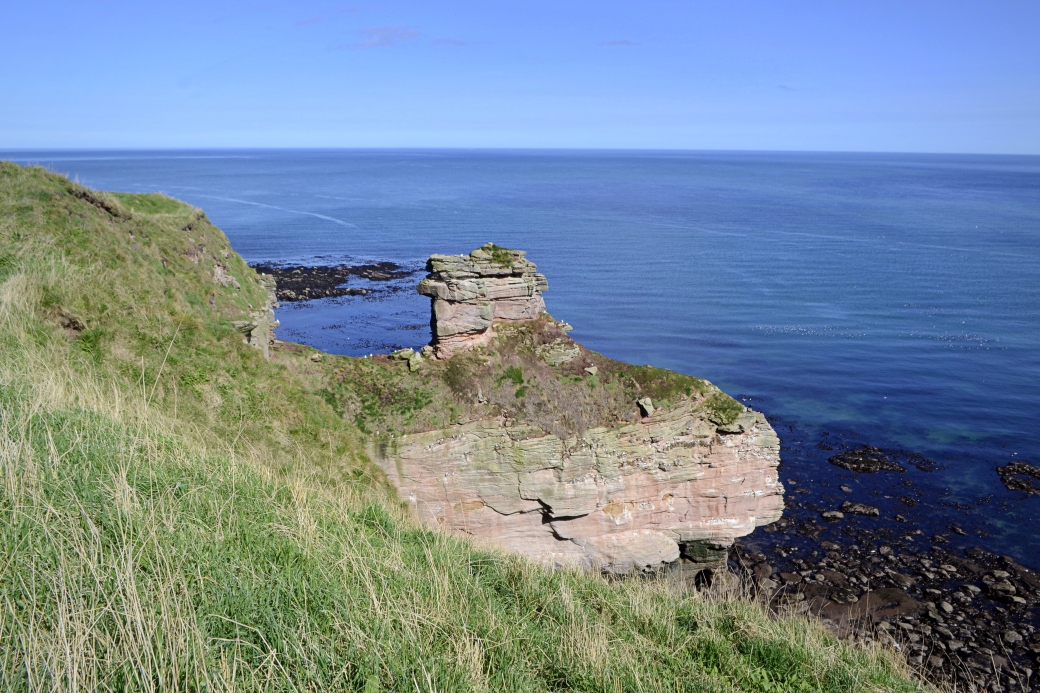 A closer view of one of the rocky outcrops; if you zoom in you can see large numbers of gulls among the crevices. I liked these expansive views of the North Sea, a rare sight for me.

I could definitely see the appeal of having a caravan on this stretch of coastline, and they seemed to be well used 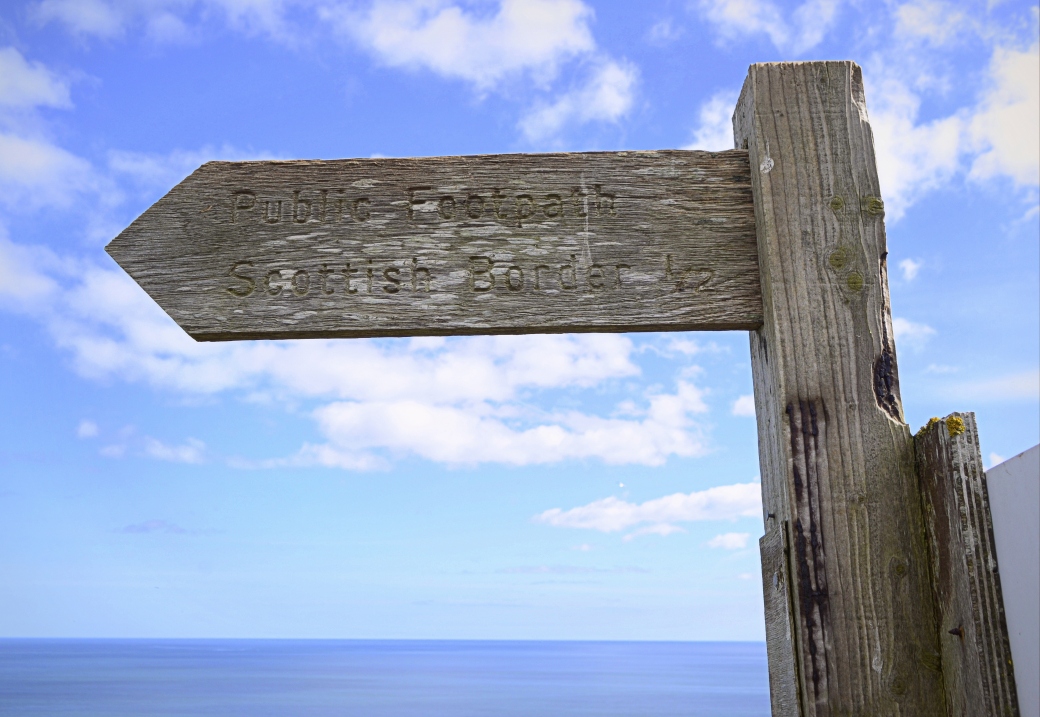 As a self-confessed border nerd, the excitement was palpable when I spotted this well-worn sign…

I don’t usually leave things on a cliff-hanger (no pun intended), but I took so many photos on this day trip that I’ll include the rest in a second post.

Also from this trip:
Hills of Edinburgh: Calton Hill and Blackford Hill

14 thoughts on “Bastions and Border-Hopping in Berwick: Part 1”