In my round-up of top treks during 2016 I mentioned a visit to the World Heritage Site of Petra in Jordan. I finally got round to pulling together some images a while ago.

(My handy official map guide to the site turned up during a spot of spring cleaning this week, which spurred on this post).

More than 2,000-years-old, Petra was the capital of the Nabataeans and prospered due to its location on a major trading route between Mesopotamia to the north and Egypt to the west.

It was later annexed to the Roman Empire and continued to thrive until much of the city was destroyed by an earthquake in 363AD. This, combined with changes in trade routes, led to the city being ultimately abandoned, unknown to all but local Bedouin. It was only ‘rediscovered’ in 1812, by Swiss explorer Johannes Burckhardt. Since then visitors have been attracted by Petra’s intricate, rock-cut facades and variety of monuments, all remarkably preserved.

I visited the Rose-Red City with a driver organised by my budget accommodation in the capital, Amman, along with a friendly family from Panama who were living in Dubai. We only had around five hours to explore Petra (and get something to eat afterwards) so it was quite a hurried visit. Thankfully all the main landmarks are on, or just off, a linear walking route which runs for about five kilometres/three miles between the entrance and The Monastery at the far end.

Here are some of the sights from my trip.

Our driver pulled in to give us this view on the way into Petra; the ancient city is hidden among the rock formations, with the modern settlement in front 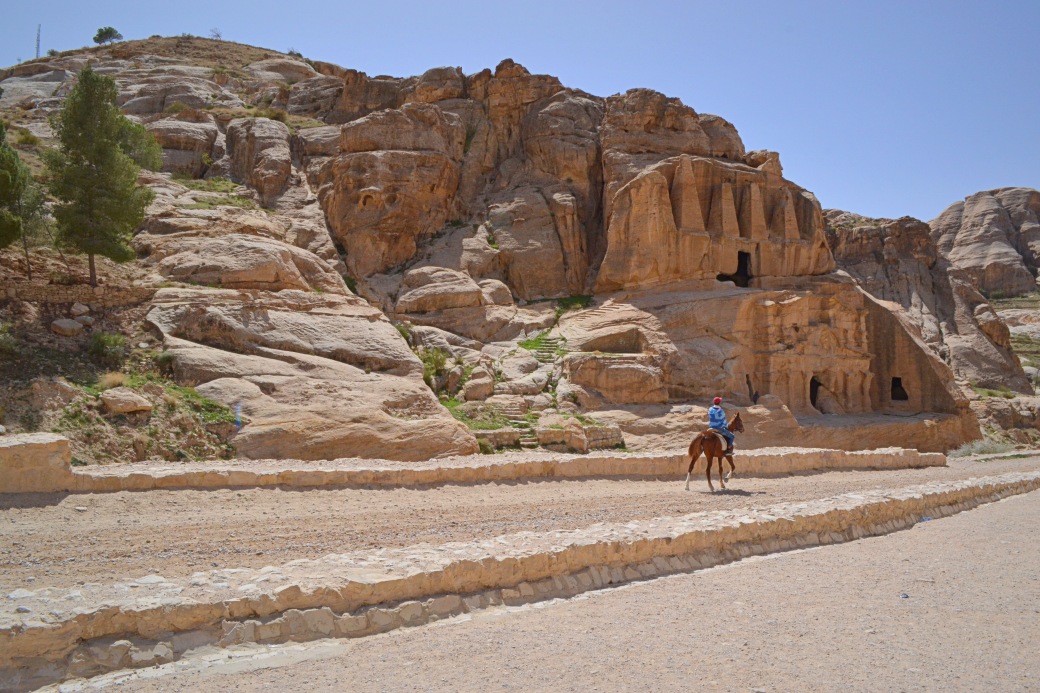 The Obelisk Tomb topped by four pyramids, above the Triclinium, a banqueting hall. This section of the walk is known as Bab al Siq or gateway to the Siq. 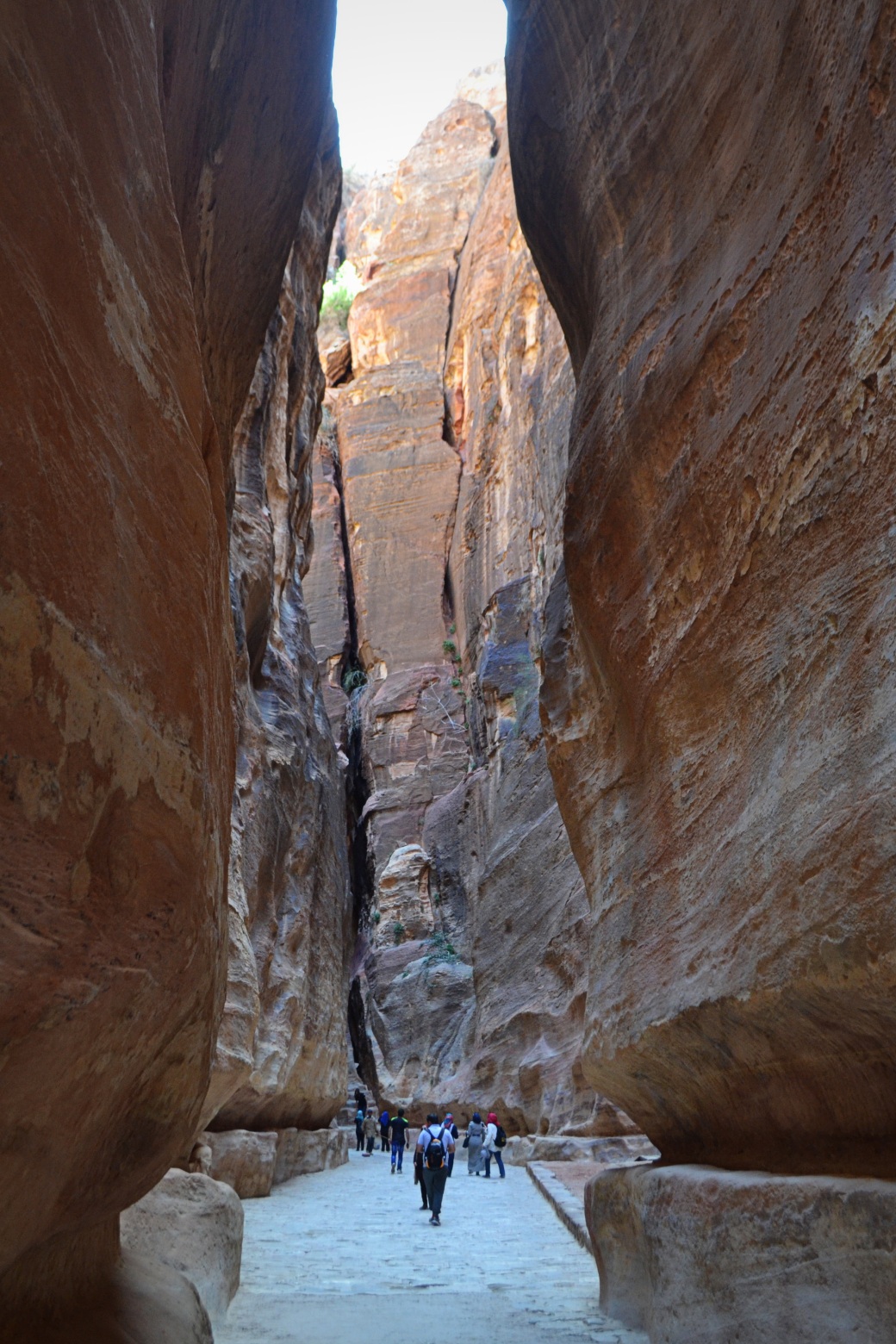 The Siq, one of Petra’s most impressive features. This 1.2km-long, narrow gorge leads into the city and put me in mind of something you’d find in the US Southwest.

Another view of the Siq and its changing vistas 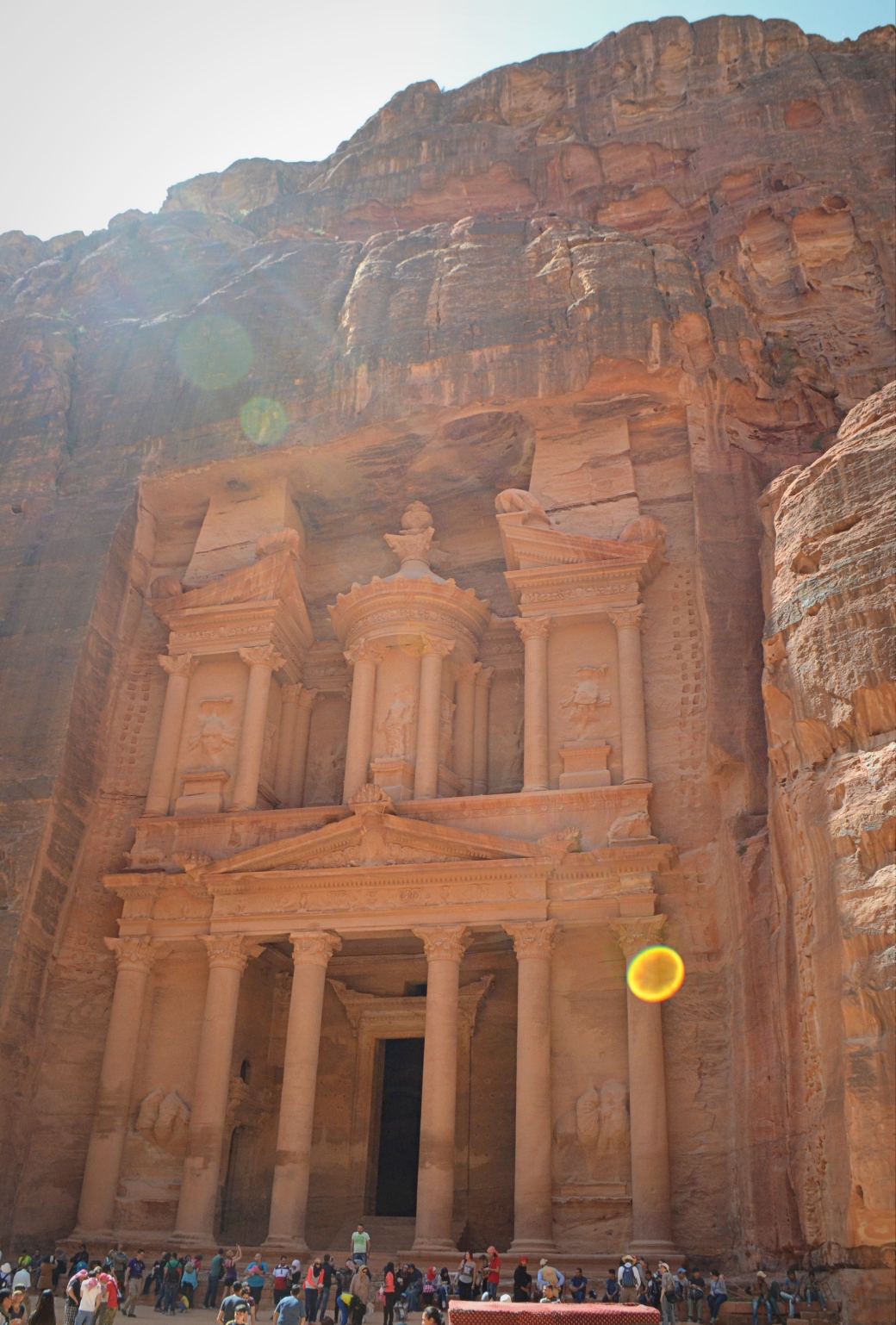 The Treasury, Petra’s most magnificent facade and best known landmark, rising to 40m

The name comes from a local Bedouin legend that a Pharoah’s treasure is hidden in the funerary urn at the top. The Treasury featured in Indiana Jones and the Last Crusade.

Camels taking a breather beside the Treasury, with the end of the Siq in the background

I felt uneasy at the tough labour demanded of Petra’s working animals, carrying (often fat) tourists in the blazing heat. The donkeys especially had a rough time going up and down the steep steps leading to the Monastery at the end of the route. You’ll be asked repeatedly if you want a ride but I always declined. 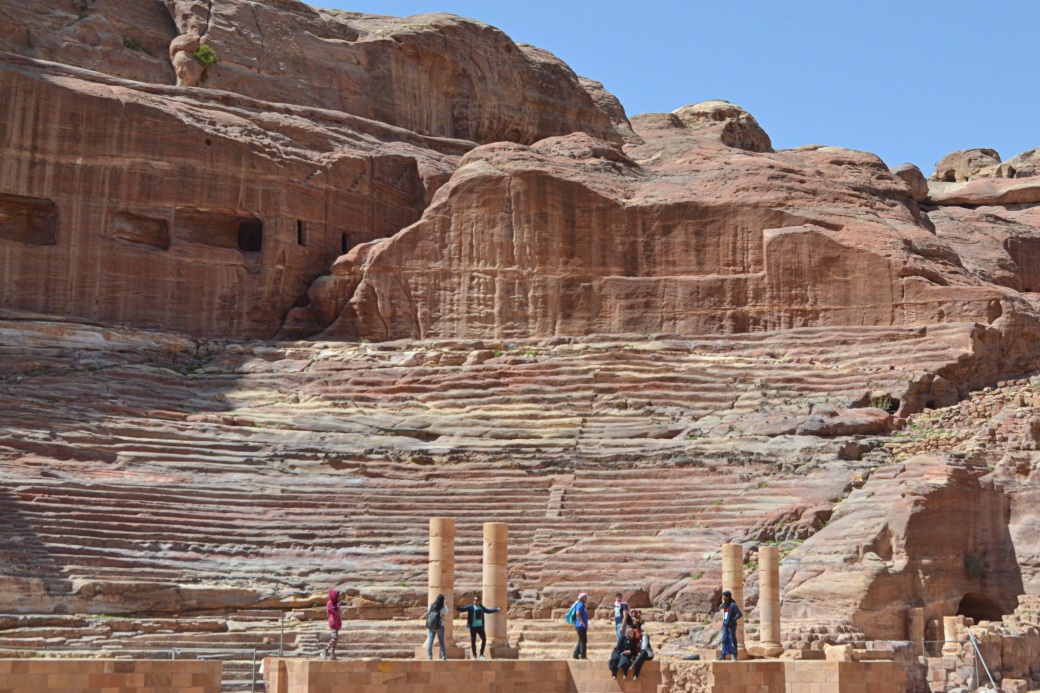 Part of the massive Theatre, built by the Nabataens and refurbished by the Romans

The Palace Tomb, one of four adjacent, highly ornate facades elevated above the main route through the city. It probably had a banqueting or funerary purpose. 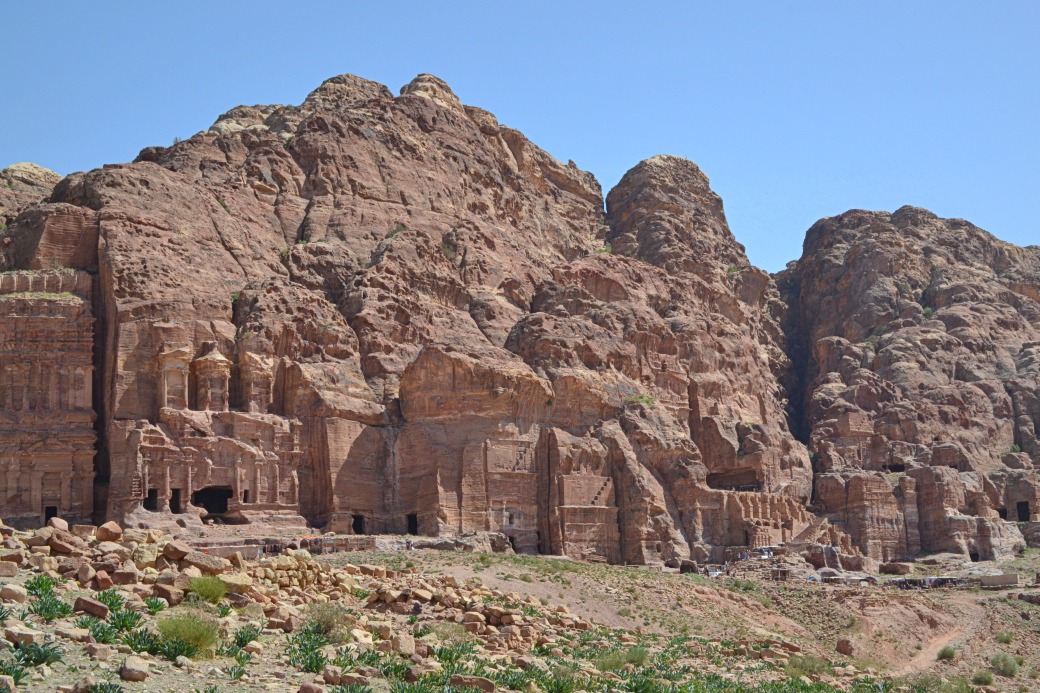 Looking back on the Royal Tombs

Looking down on the Colonnaded Street (a principal shopping street) and Great Temple on the opposite site. The square-shaped monument on the right is Qasr al-Bint, the city’s most important temple.

The opposite view from the previous shot: looking back on the Royal Tombs from the Colonnaded Street

Looking back on my route from the long, tiring, uphill climb to The Monastery

Ad-Deir or The Monastery, the final monument most visitors will reach (and many don’t venture this far). It is one of the city’s largest and doesn’t disappoint despite the effort in reaching it.

It was most likely a temple but gets its name from speculation that it was later used for Christian worship, owing to the presence of crosses carved into the rear wall. I chose not to dine in the well shaded, makeshift cafe opposite but began my long trek/dash back to the entrance, via a detour to the mosaic-tiled Byzantine Church. It was great to walk through the winding Siq again and see the views from the opposite direction.

Once outside the site, I dined in an over-priced and underwhelming cafe where I met the family I’d travelled with and our driver. The owner seemed disappointed that I chose not to order alcohol, which was even more expensive than usual for Jordan. In hindsight, I might as well have dined in the fancy hotel further up the street.

I really enjoyed Petra, despite the hurried nature of my visit and frequent exposure to the burning sun. I probably would return, to enjoy a more leisurely stroll and to explore some more of the features off and above the main route. A fellow tourist also recommended the atmospheric Petra by Night experience, where the Siq and Treasury are illuminated by hundreds of candles.

Petra was just one of my highlights in Jordan. Others included visiting the Dead Sea, the mosaic city of Madaba, the Roman ruins of Jerash and wandering around the hilltop Amman Citadel. If you plan to visit, make sure to buy the excellent value Jordan Pass in advance; it gives prepaid entry to Petra and loads of other attractions, and saves you having to buy a visa on arrival in the country.

More information:
www.visitpetra.jo
uk.visitjordan.com
www.jordanpass.jo
www.jordan-tower-hotel-amman.hotelmix.co.uk (my budget accommodation in the historic centre of Amman; has a mix of private and dorm rooms, a nice rooftop terrace and can organise tours around the country)

8 thoughts on “Jordan: A Dash through Petra”