In my review of my most memorable hikes and cycles of 2016, I included Vodno Mountain which overlooks Macedonia’s capital, Skopje.

It was such a worthwhile experience, and I took so many photos, that I thought I’d cover it in a post of its own.

Sadly I only had one day in this little known (to people in my part of the world, certainly) former Yugoslav country. I arrived some time after 4am on an overnight train from Serbia and left on an bus for Thessaloniki in Greece early the next morning, en route to Athens for a flight to Jordan.

A statue of Mother Teresa near the city centre. The late saint was born in Skopje in 1910, when it was part of the Ottoman Empire.

One of the first things I spotted on the early morning walk to my accommodation was the huge cross on the mountain top above the city. I soon learned that you could get up there via a cable car and, after a quick orientation around the city centre, set off to do just that.

I’d planned to take a bus to the cable car station but wasn’t sure where it left from (my hostel owner had told me but I’d forgotten, also the tourist office was closed… just as you might expect on a Saturday afternoon at the start of the tourist season). Instead, I used my phone’s GPS to navigate to the foot of the mountain and started hiking up using the network of trails.

It was a steep ascent in places, not helped by my inappropriate clothing and the hot, sunny weather: Skopje, my trip’s most southerly point to date, felt like the beginning of a more Mediterranean climate. The impressive, ever widening views back over the city and the mountains beyond gave an excuse to stop a few times though. 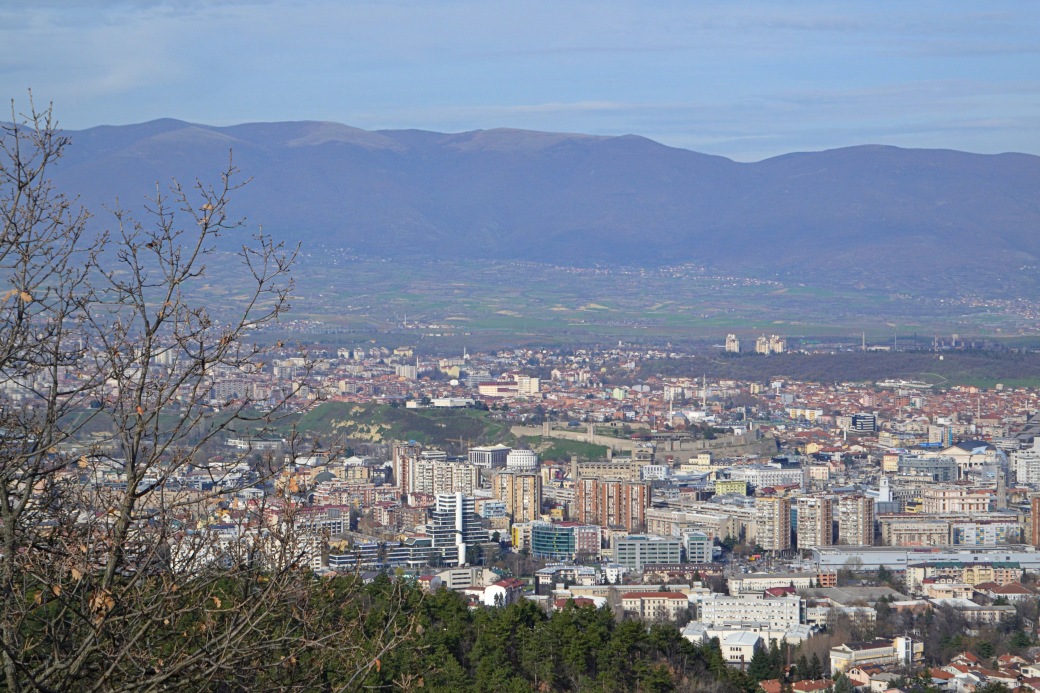 View down over the city. Looking at the map, the mountains beyond must stretch into nearby Kosovo and Serbia.

I finally arrived at the busy recreation area halfway up the mountain (Middle Vodno) where you can get the cable car. I’m always a wee bit uneasy travelling in these things but it looked new and shiny and I was sharing the pod with some friendly fellow tourists, from Turkey.

Once on Vodno’s summit (1,066m), I took a wander around to enjoy the views. Visibility was superb and I must have been looking at a huge chunk of this small country as well as its neighbours. Giant, snow-covered mountains could be seen in various directions, the nearest to the west towards Albania. I’d been surprised to hear that Macedonia has ski resorts.

I headed back towards the Millennium Cross where lots of people were relaxing or enjoying a bite/beverage in the little cafe. The 66m cross was built in 2002 to mark 2,000 years of Christianity and is lit up at night. A large Macedonia flag flew from a mast close to the cross. 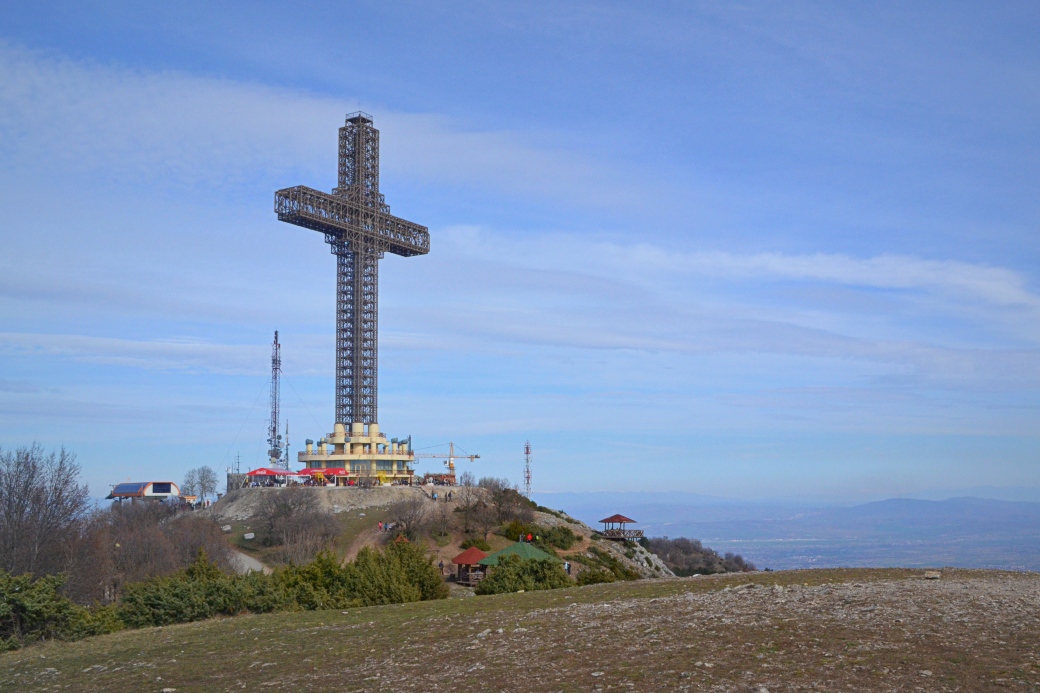 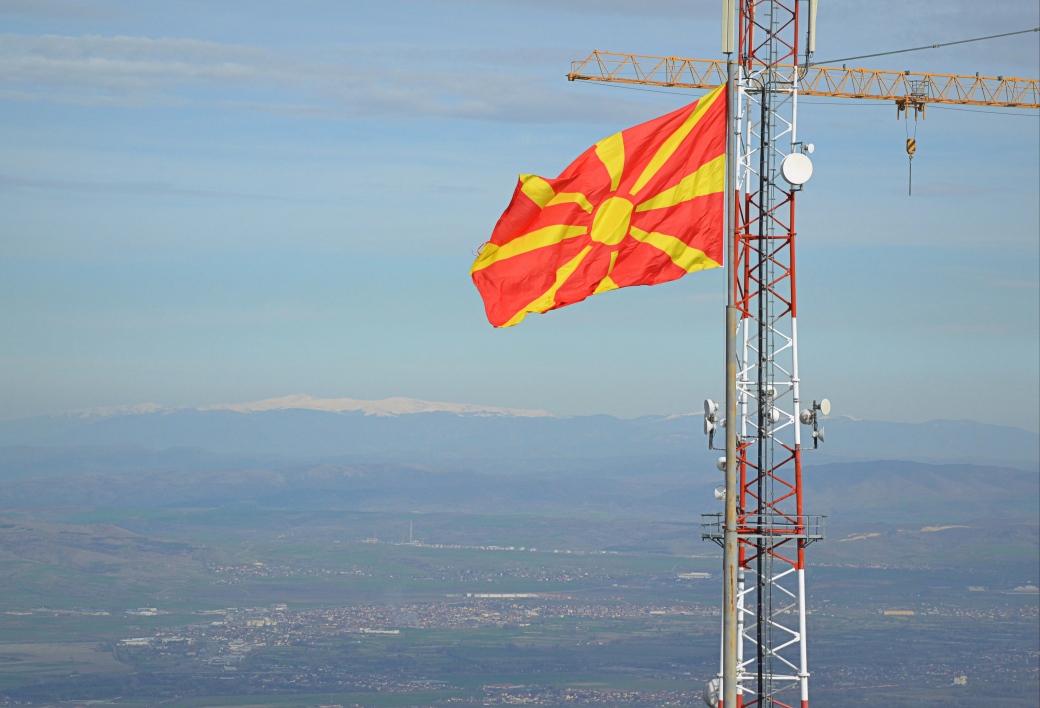 I spent a bit more time at the summit taking in the views of the city and of the cable cars moving up and down. Some had mountain bikes attached to the outside for those who planned an alternative means of descent.

Satisfied I’d seen enough and wanting to explore more of Skopje, I took another pod down then walked the remainder of the distance back to the city centre. If I get a chance, I’ll add a short post showing some of the city’s ‘interesting’ modern architecture. 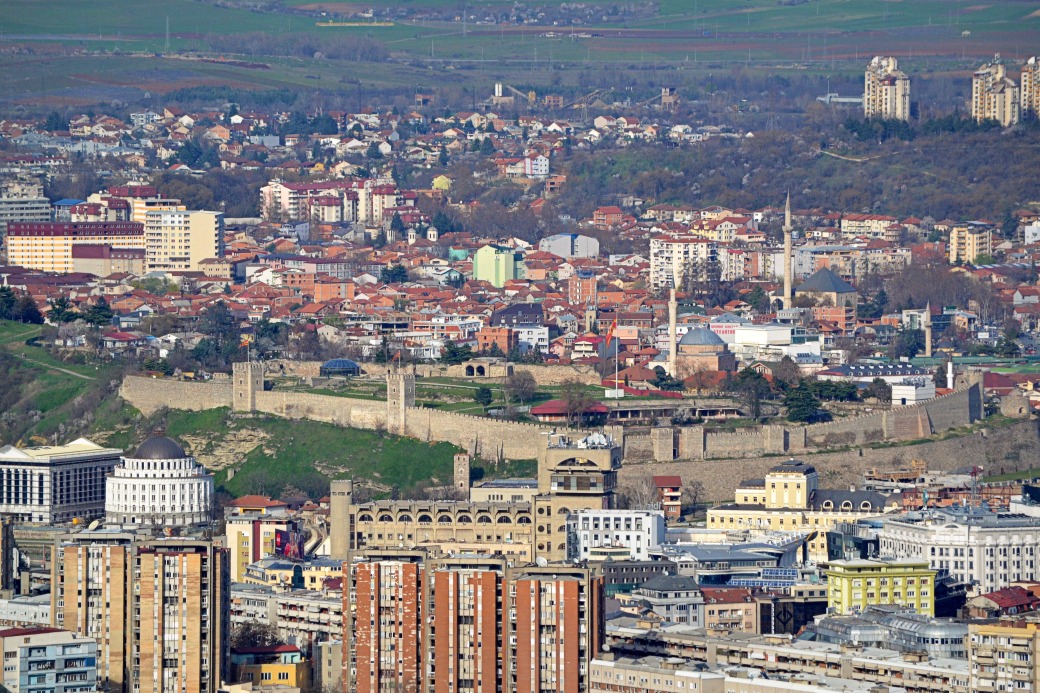 A zoomed in view over the city taken on my descent. The huge Skopje (or Kale) Fortress, sitting above the Vardar River, dominates the old town.