Two days after tackling lowly Cairngaver in County Down, I revisted another hill that had previously defeated me: Slieve League on the rugged southwest coast of Donegal.

I first attempted Slieve League back in 2007 but it was a half-assed, hungover attempt following a night out in nearby Killybegs.

Top image: Couldn’t resist this photo opp close to the summit; it’s not as hairy as it looks

The winding drive up to the top car park – back when there weren’t any barriers to stop you plunging into the Atlantic, and in a car that kept stalling – left me a bit of a wreck, when I’d already been in a delicate state.

This got me off to a bad start and I didn’t enjoy the hike, even though the views were stunning. Also we hadn’t really researched the route and had no idea how long it would take, so meekly gave up and returned to the car after ascending a short distance. It’s been something of a monkey on my back ever since, especially the prospect of taking on the infamous ‘One Man’s Pass’ with its threat of a steep drop into the ocean on one side.

My recent visit was with friends who had been to the top before. This was reassuring but I was still a bit uneasy, especially because it was raining heavily before we started.

Our route was a variation on the Slieve League walk in Adrian Hendroff’s  guidebook ‘Donegal, Sligo & Leitrim: Mountain & Coastal Hillwalks’. We set off from the bottom car park instead of the top one but followed the same route to the summit and down via the Pilgrim Path. This meant a long road walk at the end and if possible, I’d recommend bringing two cars and leaving one at the bottom of the Pilgrim Path.

I didn’t intend to add a post on this hike and didn’t take many photos; most of those below were taken on my phone. This was more of a catch-up with friends so I was happy to enjoy the chat and the views without stopping all the time. As it turned out, it was the best hike I’ve done for a while so I thought I’d add a (slightly) shorter-than-usual post on it.

Slieve League was nowhere near as scary as I’d built it up to be since my previous, aborted visit. Parts of the route have since been upgraded with stone paving. Above all, the views were mesmerising on this perfectly clear day: from Errigal in the north to Nephin across Donegal Bay in County Mayo in the south, with the hills of Fermanagh, Leitrim and Sligo inbetween. I’ve done a lot of hiking since 2007 and could recognise (or guess at) many of the distant summits. 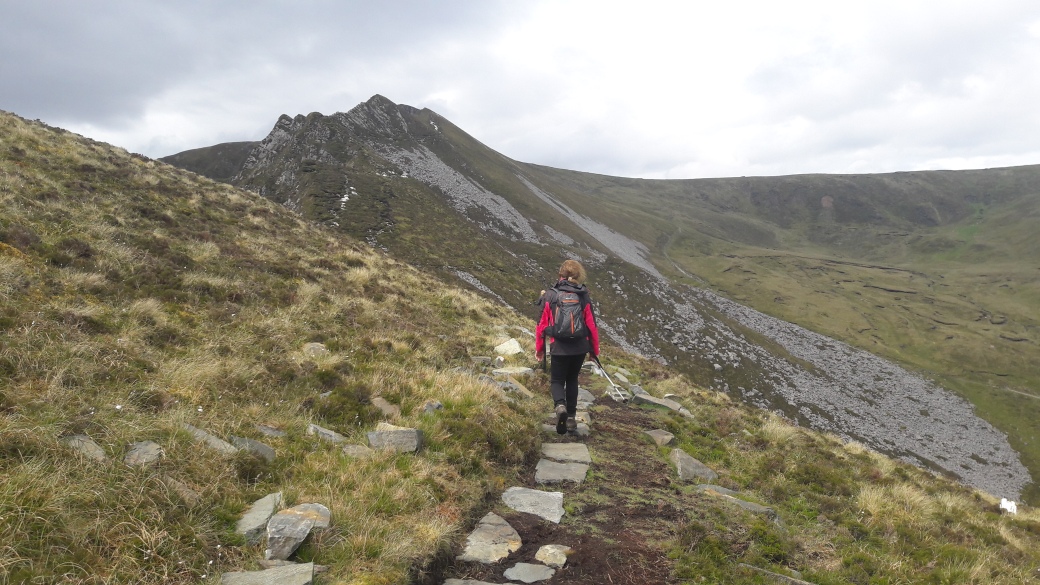 Approaching the jagged ridge which leads to the main plateau; we avoided it by following a path below it on the right.

Some consider this knife-edge ridge to be true ‘One Man’s Pass’; see for instance this somewhat hairy YouTube video of three walkers tackling it. I’ve also seen it referred to as the ‘One Man’s Path’. 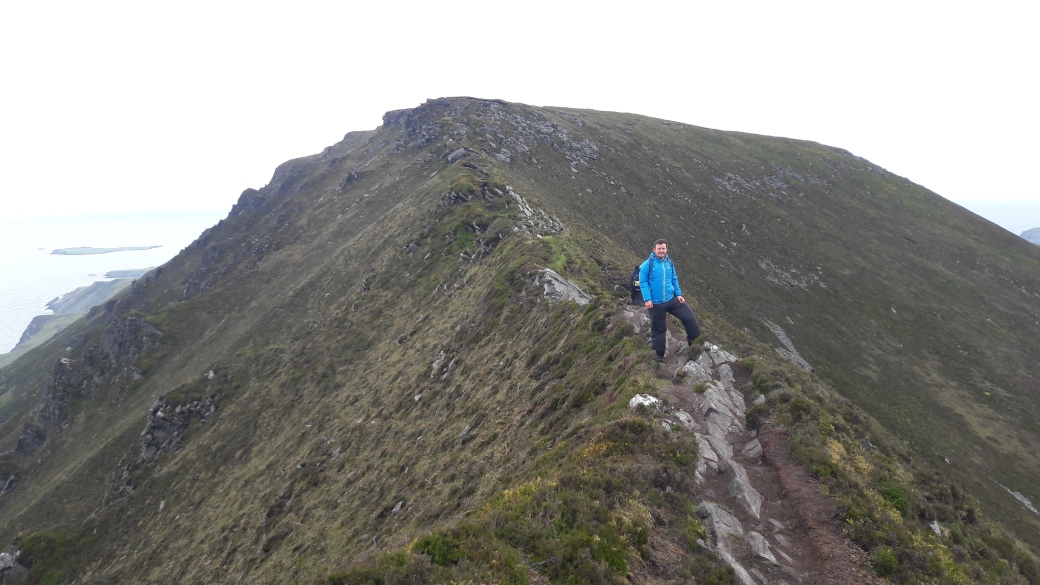 Me at the start of the conventional ‘One Man’s Pass’. In the end I found it perfectly fine to cross, though it looks more intimidating from a distance. 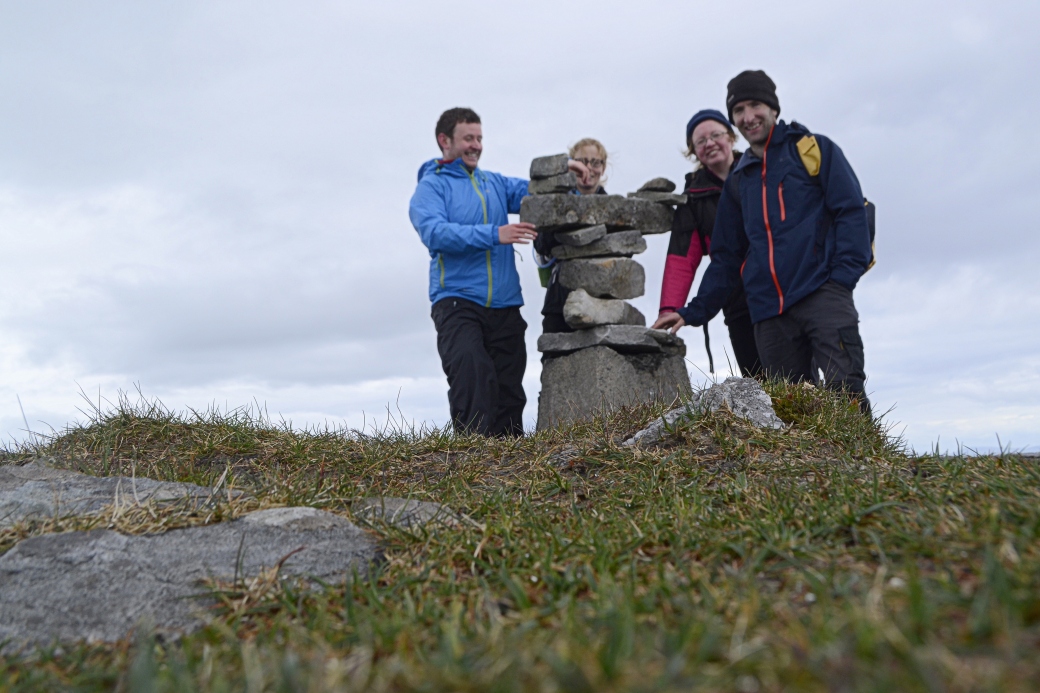 At the summit trig pillar: I tried (and failed) to find a comfortable pose before the self-timer went off 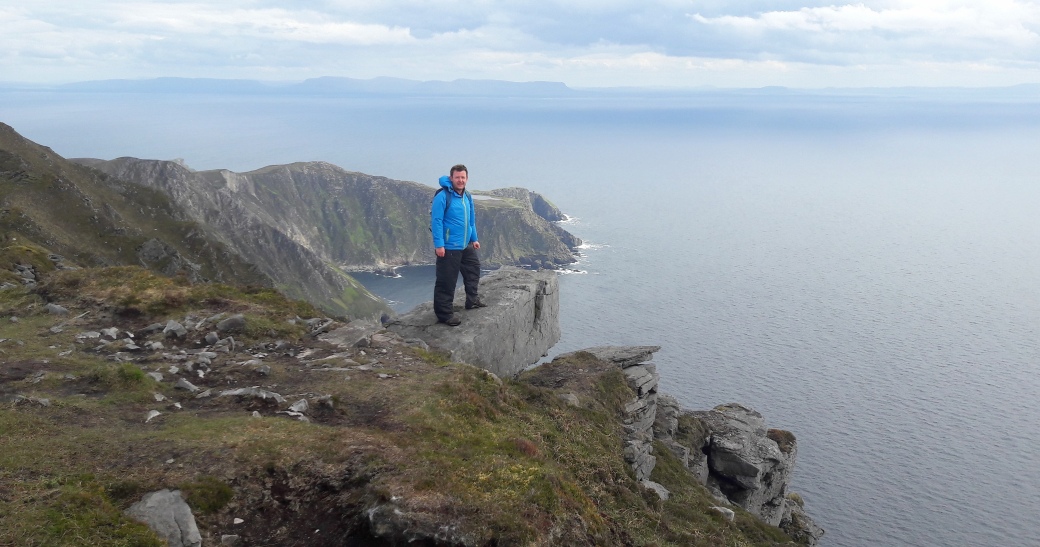 A slightly different view of me standing on the oft-photographed, scary-ish ledge near the summit. 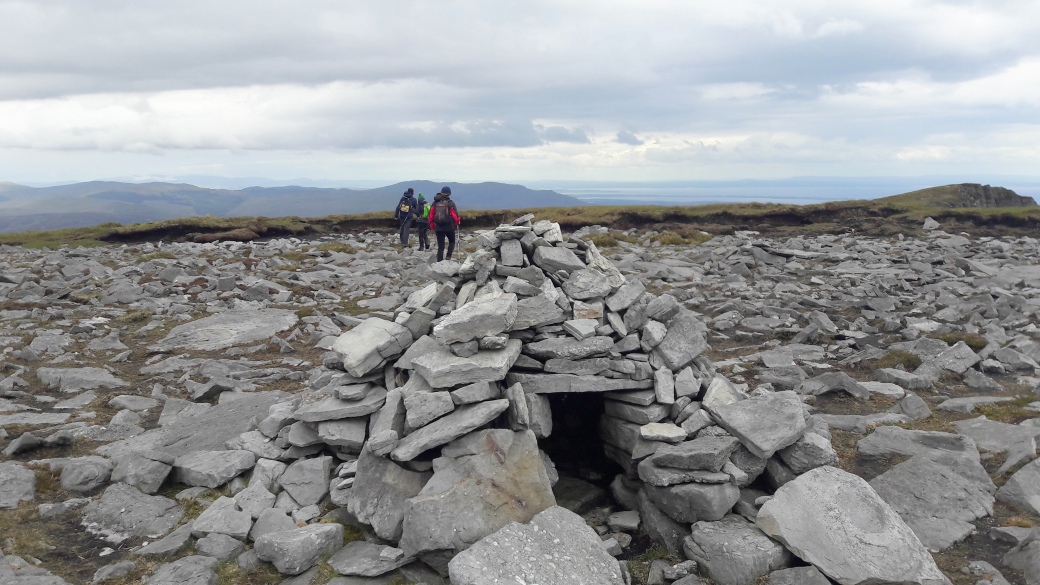 I suspect it’s a recent construction but the plateau is apparently also home to the ruins of an early oratory associated with Saint Assicus. We didn’t see it and I’ve yet to see an image of it.

Descending via the Pilgrim Path, with views of Teelin Bay