Those few who visit likely only do so because of the recent interest in bagging Ireland’s County High Points; Slieve Beagh is home to the highest point in Monaghan. I’ve been going there before it was cool, though.

I recall becoming slightly intrigued by Slieve Beagh around 2009 after noticing it on maps. It looked so empty, with no roads for miles, but surely there had to be something up there? Since then I’ve visited many times, and have approached the summit from all three surrounding counties. It’s wet, tiring and mostly featureless but I enjoy its quietness and far-reaching views.

On my most recent visit I started from the Fermanagh side, at the (very) remote car park at Muckle Rocks in Mullaghfad Forest. It’s located at H520409 and services the Sliabh Beagh Way walking  route, part of the Ulster Way. I made my way northwest through the forest towards the large, obvious ‘S’ shape in the tracks (see below) then headed uphill. 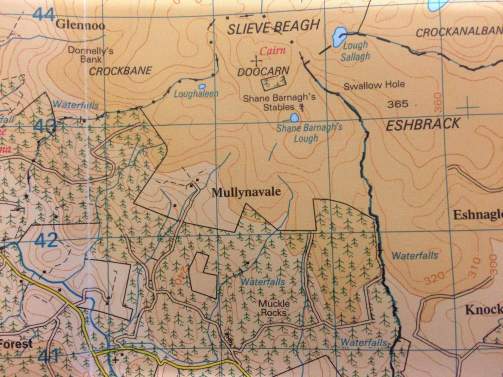 Map screen shot courtesy of the ever patient Canice O’Donnell

The last section of track offered fantastic views over the Fermanagh countryside, with distant Cuilcagh Mountain dominating to the south west, and smaller Benaughlin visible in front. 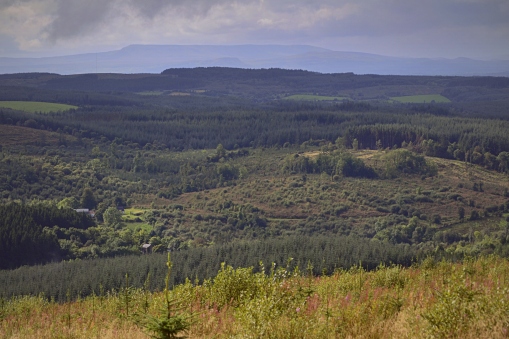 View towards Cuilcagh in the distance

The track dies out at the forest edge then it’s onto open hillside (via a couple of handy fence stiles) as you head towards the top. This part was the typical squelchy, energy-sapping slog synonymous with Slieve Beagh for many. Eventually I arrived right at the summit area, marked as Doocarn on the map. There are two small hillocks here and I chose the more northerly one to stop for lunch. Watch out for the large, heather-covered holes; sinking waist deep is another typical Slieve Beagh experience.

The views had now opened up to the north, over Tyrone and the Sperrins. I could clearly see Bessy Bell near Newtownstewart, and the distinctive twin peaks of Dart and Sawel briefly appeared. I was surprised to spot the distant rounded shape of Slemish far away (0ver 90kms) in County Antrim. Slieve Gullion in County Armagh was also easily visible to the southeast, plus some smaller hills in Cavan to the south.

View north to Tyrone and the Sperrins

I then set off east towards the Monaghan high point, a small hump known as Slieve Beagh East Top. It overlooks little Lough Sallagh, the highest of many small lakes dotted around Slieve Beagh, and split between Monaghan and Tyrone. As you walk downhill from the main summit, the lake disappears out of sight altogether until you’re almost at it; quite disconcerting in this mainly empty landscape.

After a quick visit to the East Top I made my way towards the point known as the Three County Hollow, a dip where the three surrounding counties meet. It would be great to see this unassuming spot marked on the ground somehow (it does however give its name to the bar within the Sliabh Beagh Hotel in nearby Knockatallon, Co. Monaghan).

I then headed south, back towards Mullaghfad Forest. This was another long, slow, tortuous slog over wet and uneven ground where I fell on my front/back several times and swore a lot. The only ‘fun’ element was walking alongside the nascent Colebrooke River, which here divides Fermanagh and Monaghan, and thus the North and South of Ireland. A ‘straddling selfie’ was of course called for.

I finally reached the forest perimiter where there is a wet, muddy track of sorts. To my left the stream formed a picturesque little waterfall at one point; a sort of mini, Irish Niagara Falls.

Irish Niagara: less hassle crossing it than the North American one

After a while I met the point where the Sliabh Beagh Way crosses the stream (via a small wooden footbridge) and into the forest. From here it’s an easy, waymarked walk back to the car park on forest tracks.

An enjoyable day out despite the at times hellish terrain, and somewhere I’ll continue to visit. Next time I plan to walk the first couple of sections of the Sliabh Beagh Way, and have been trying to convince a friend to join me on this.

While you’re in the area: Look out for the atmospheric and slightly spooky Mullaghfad Parish Church (1836). It’s almost hidden in the surrounding forest and is used only ocassionally during the Summer months; it’s never had electricity. The small graveyard contains the graves of two Ulster Special Constabulary (‘B’ Specials) officers killed by the IRA in May 1921 during the Anglo-Irish War.

From an earlier visit to the church