A highlight was visiting the small village of Falcarragh and exploring some of the surrounding sights, including its long sandy beach.

Top image: Walkers (and an angler) on Falcarragh Beach

First, though, is the view from our holiday house, Brinlack Cottage.

The weather wasn’t the best during our stay but that’s not a big deal when you have this vista to enjoy with your morning coffee (when you could see it, that is). The house is airy and spacious and well worth considering if you plan to visit this part of Donegal.

The first stop on my Falcarragh outing was an early church site a short distance to the east of the village, Ray Church.

Ray Church with the cloud-covered Derryveagh Mountains beyond

I knew nothing of it until that morning when I Googled things to see and do in the area, which surprised me seeing as it has a very tall high cross thought to date to the late 8th century. 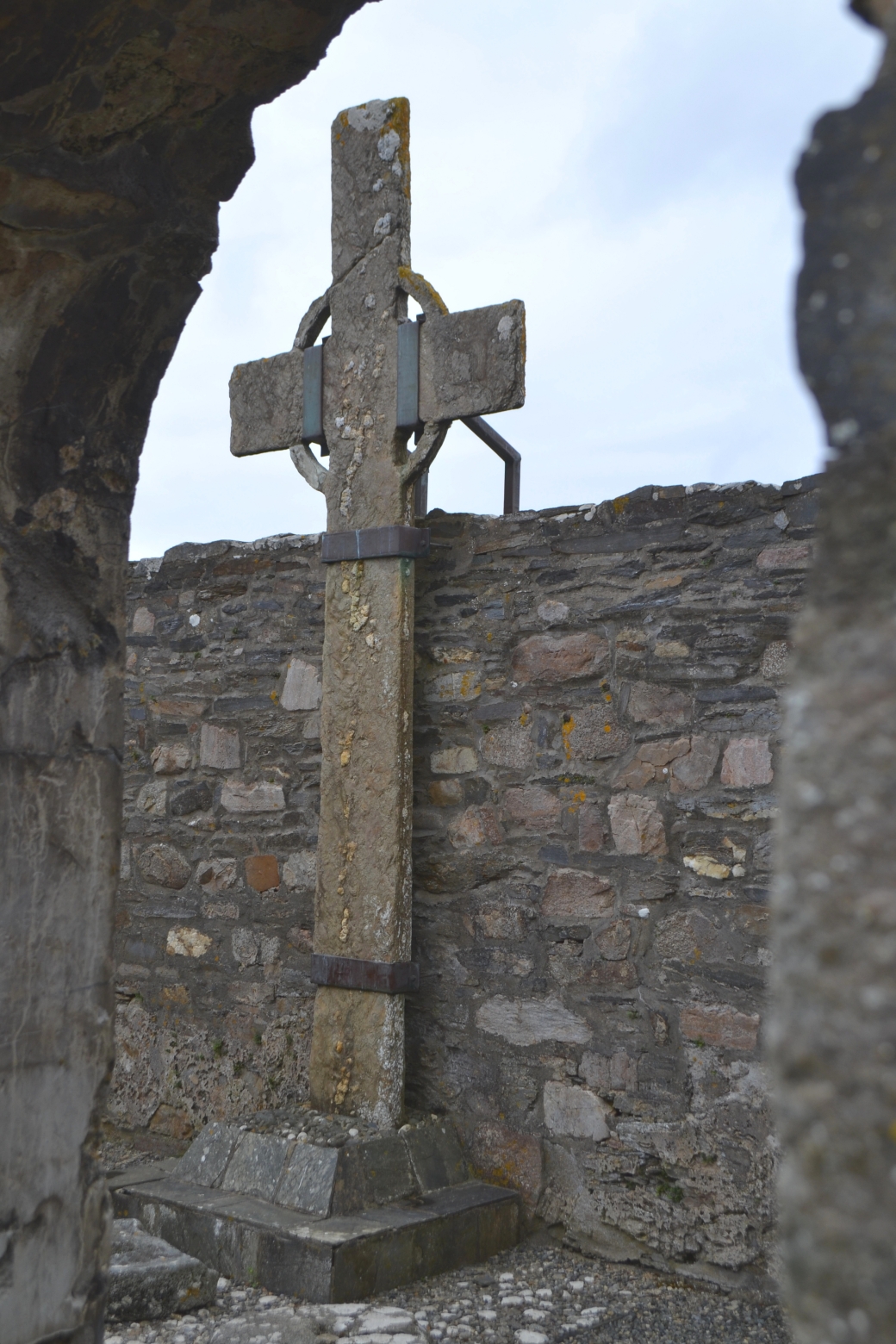 Ray High Cross, which was repaired and moved inside the church in recent decades

At apparently 5.56m, it is probably just a little smaller than Ardboe Old Cross, not too far from me here in County Tyrone; the latter is supposedly the third tallest high cross in Ireland.

The Ray cross has no decoration but closely resembles one on the Scottish monastic island of Iona. In the 7th century, four abbots of Iona came from this part of Donegal and the church here was most likely their home church.

A local legend tells how the cross was made on nearby Muckish Mountain for Colmcille (St. Columba), the Donegal-born founder of Iona. He intended to bring it to Tory Island but gave it instead as a gift to his companion St. Fionán, who had miraculously retrieved Colmcille’s lost prayer book.

Looking back on the church and cross

After eating a quick lunch courtesy of Asda Strabane, I headed back to Falcarragh with the aim of walking down to its beach, which is set back quite a bit from the village. Most people seem to reach the beach from the car park near its eastern end but I started from the western end, heading first for the small pier on Ballyness Bay.

Looking across the narrow Ballyness Bay, with Tory Island visible in the distance on the right 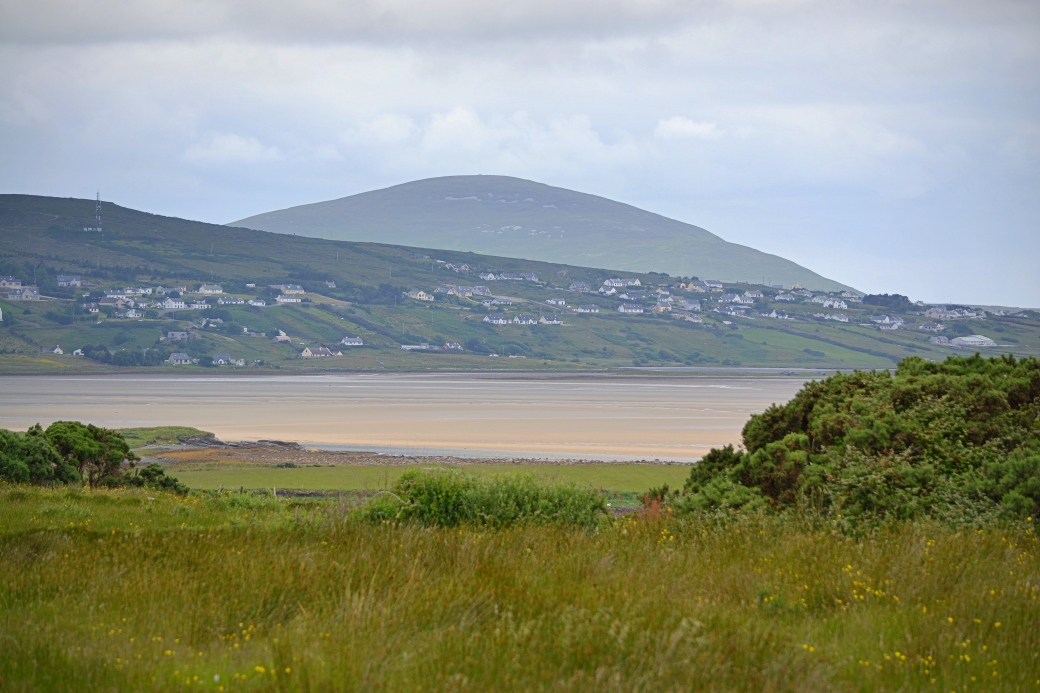 Looking across the bay towards the prominent, standalone hill Cnoc Fola or Bloody Foreland

I’d planned to hike this 314m hill during the trip but in the end didn’t bother because of the changeable weather. Its views of ocean, islands, beaches and mountains must be stunning. Definitely one for next time. 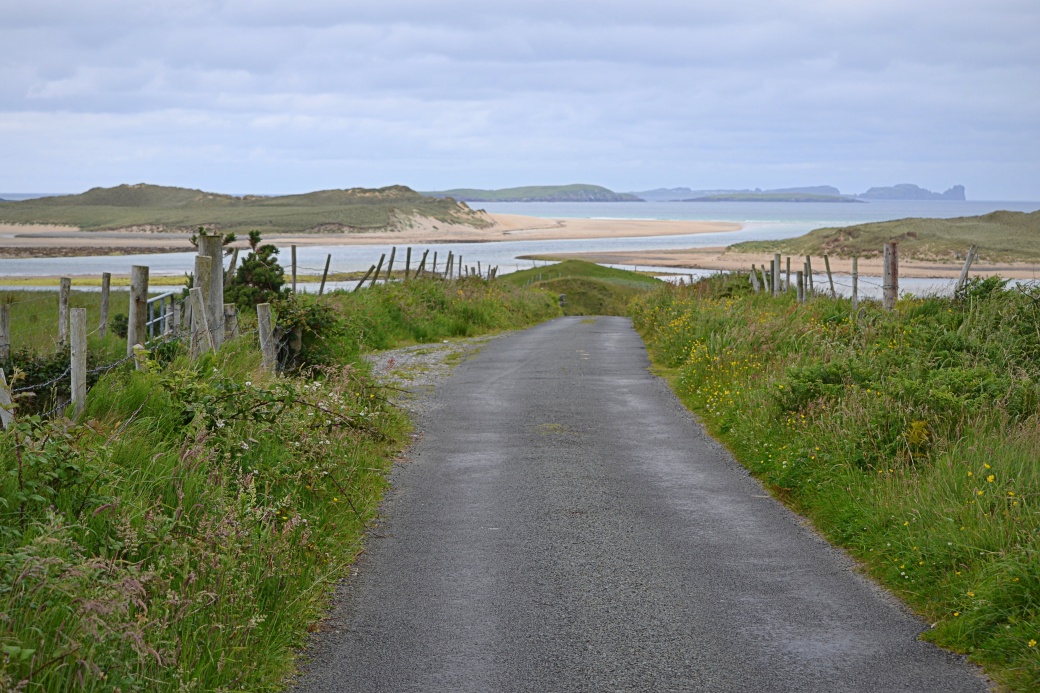 Wonderful views en route to the beach; there’s a benefit to walking rather than driving

After reaching the pier, I walked across a small inner beach (with widening views behind to the Derryveagh Mountains) to reach the elevated sand dunes which hid the main strand and run along its length. It was tricky enough walking up the steep sand slope but I was eager to see the views on the far side.

Looking back from the sand dunes over the inner beach, with some of Donegal’s mightiest mountains beyond: from Muckish on the left to Errigal on the right

On top of the dunes, I got my first glimpse of the main, 5km-long strand. Tory Island, with its intriguing signs of civilisation, was visible around seven miles to the northwest, beyond the smaller islands of Inishdooey and Inishbeg. The jagged cliffs at its eastern end were particularly inviting. As I walked along, the dramatic Horn Head peninsula soon came into view to the northeast. 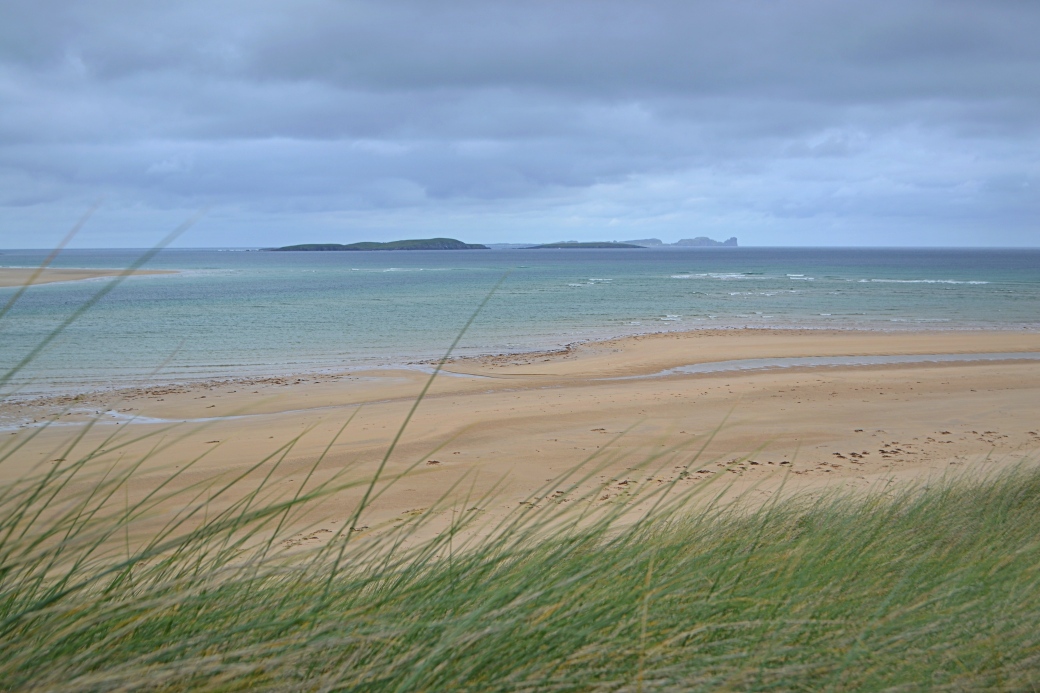 A closer look at Tory

The finger of land ending in Horn Head

I chose to stay above the beach as I headed east, there being clear trails through the rushes. I only saw one person, walking a dog, below me at this end of the beach.

Calamity struck when I realised I was missing a camera lens: I’d set it down while changing to the other one, and then wandered off – a common enough occurrence with me. After about 20 minutes of pacing fruitlessly back and forth, I had a genius idea that I’m still proud of: I checked the camera for the last images I’d taken with the missing lens then painstakingly tried to find the exact spot and views, lining up islands and a small stream among other clues. I finally located it; it turned out to be on a different trail than I’d assumed I’d been on.

The crisis diffused, I decided to make my way down to the beach itself. I had it to myself for most of the time, only coming across fellow walkers, anglers and a surf class at the far end. 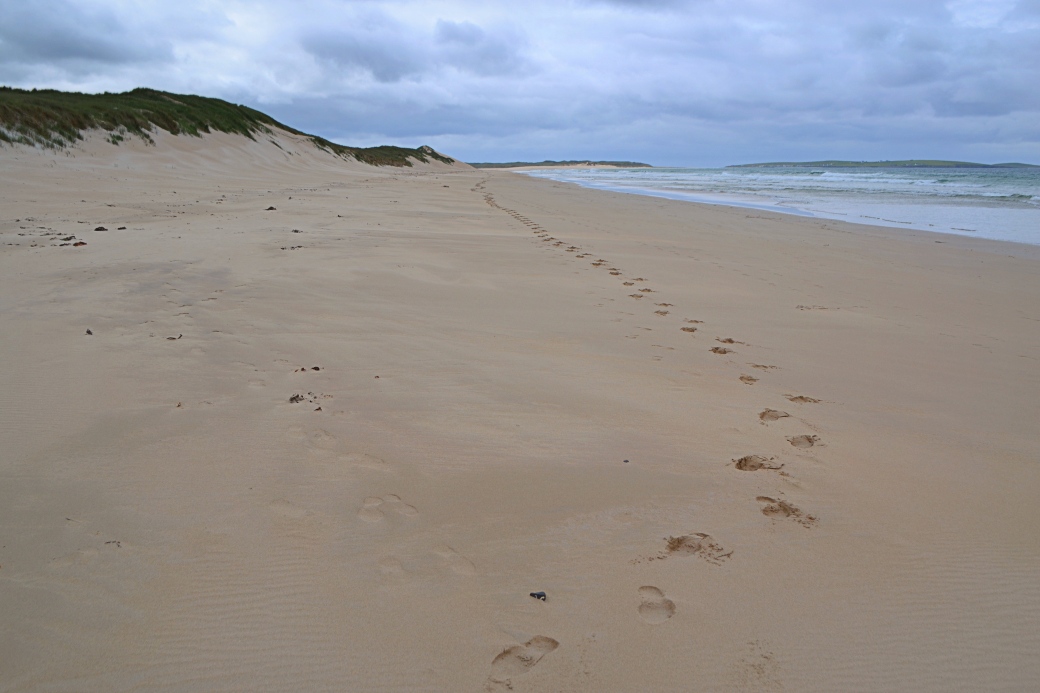 Only my own footprints behind me

Another view of Tory; more of the island appears as you cross the beach

Close-up of an angler with Horn Head in the distance; there’s another beach just visible on the right that I’d like to explore next time 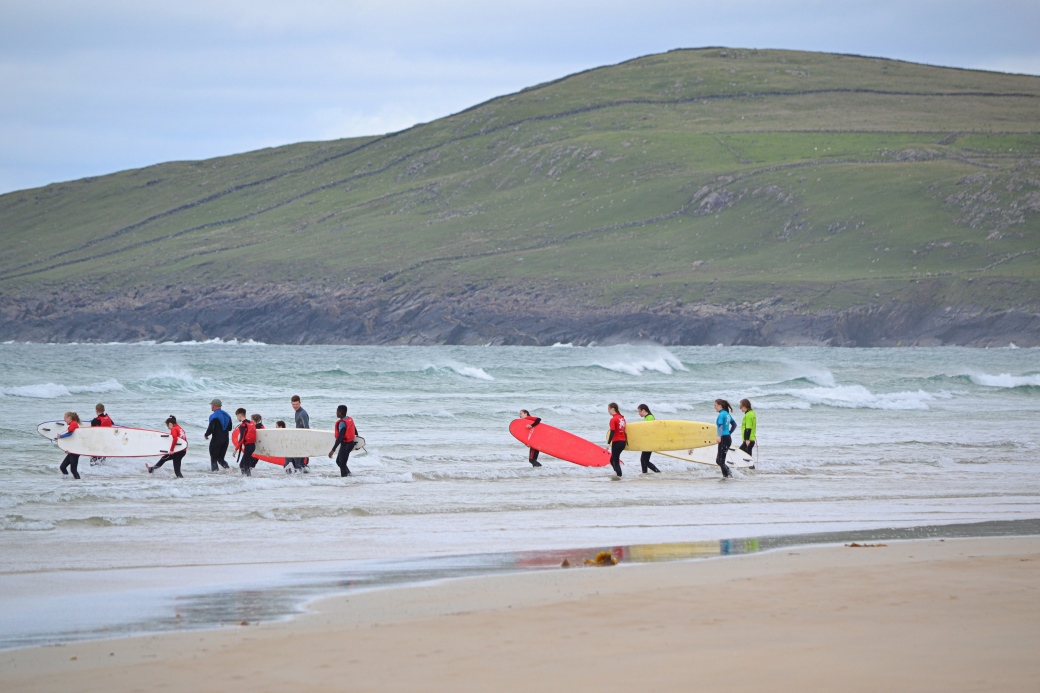 A surf class entering the water

I completed a loop back to the village via the main car park, with a total estimated distance of about 10 kms / six miles (not including lens hunting).

A corner of Donegal I plan to return to, hopefully with a trip to Tory Island and an ascent of Cnoc Fola.

11 thoughts on “Donegal: Around Falcarragh”